close
Isolation on land as at it is at sea 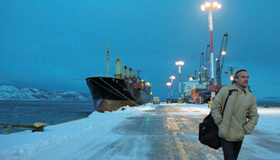 A despotic and forsaken crewman on a merchant boat is granted leave to visit his Alzheimer’s-stricken mother, the younger sister he’s never known and a spurned father far out in the sticks. Finally reaching his destination, the pueblo’s handful of elder habitants isn’t swayed by the return of one of their own. Despite the decades at sea, there is no hero’s welcome. A viewer’s senses must be firing on all pistons to hang with the film’s silent shout and therefore its slow emotional pull may dissuade audiences craving a hand to squeeze.

Filmmaker Lisandro Alonso takes care to exploit long beats in his wide shots. He keeps a distance from virtually every character in the film. One scene after the next doesn’t tread past a medium shot. The effect keeps an emotional distance with vagabond sailor Farrel (Juan Fernàndez). The man is heavily burdened and seeks to shake his sea legs and trek through the frozen terrain of Argentina’s Tierra del Fuego.

Given the go-ahead to visit his bedridden mother, the introverted roughneck is slow to move his feet. He travels through long stretches of cold and desolate territory on the back of a lumber flatbed, sipping from the bottle he keeps buried in his red duffel bag.

Soon enough he’s walking through the center of his hometown but goes blank as to where the canteen is. A man pushing a wheelbarrow points him in the right direction. Still, he’s home and yet steers clear from home; lingering in the eatery which is a dark little joint only lit by the raze through the frosted windowsills. For hours he’s shooting glasses of boxed red wine. Nearing closing time and well-inebriated Farrel saunters off into the snow tailing some girl. The girl turns out to be his sister Analìa (Giselle Irrazabal).

The next day two men are carrying the passed out derelict from the snow and tucking him into a bed. One of the men is Farrel’s father who verbally rebukes his son’s return. “I don’t know why you came back,” he snaps while his son is unconscious. “You left me one hell of a legacy.”

Once rested and vertical, Farrel gulps tea and sits with his ailing mother. She doesn’t seem to realize the charge that she nursed and raised is sitting next to her, fixing her blankets. He repeats his name numerous times to blank stares. She only complains about the room’s toasty temperature.

There are no tears, no hugs—not even a gesture of goodbye. Like the weather, the emotions expressed between folks are bitingly cold. Is life so mechanized that there is neither time nor an inventory of sentiment to offer? A life fit with isolation—this breed of people who hide way up in the mountains are no different than the seafaring folks who drift out into the landless abysses. But more to the point, a son’s return to his hometown fails to reap some grand closure or epiphany. Farrel left long ago and though the town’s stayed the same he’s changed. The objective to visit with his mother was crossed off the list, certainly. Departing this time he may never return again. And maybe it doesn’t matter. The cosmos are undeterred—life and its tough routine on the high seas, or up a mile high, toils on and on.