close
The Love Dr. is out 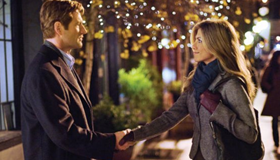 Love Happens —but not much else in this heartfelt but dull romantic dirge centering on a self-help author who doles out advice on how to cope with pain to everybody but the one person who needs it most: himself. The attractive presences of Aaron Eckhart and Jennifer Aniston will help draw in female audiences but the downbeat nature of the story and lack of real romantic sparks between the pair will probably send this new entry quickly to the DVD shelves. Universal, badly in need of a hit, won’t find one here with box office totally dependent on Aniston’s fan base which likely will not be enough to make this adult drama anything more than an early fall casualty.

Dr. Burke Ryan (Eckhart) is a gung-ho therapist, author and motivational speaker who helps the multitudes deal with loss and grief. Unfortunately he’s hiding his own serious problem in this regard. He’s still in denial over the tragic death of his wife in a car accident three years earlier. Into his life comes free spirit, Eloise (Aniston), a flower shop owner whose own love life is less than sterling. As the two circle each other, Eloise decides she knows what’s best for the Doc but their relationship is (painfully) slow to build. Ryan also has problems with his father-in-law (Martin Sheen) who seems to blame him for his daughter’s death. How Burke handles his burgeoning fame and practice while trying to close the book on his own life’s saddest chapter is what makes up the core of the conflict.

What doesn’t quite jive here is Universal’s marketing hook which sells Love Happens as a standard romance when in fact it’s primarily about a man who is late in coming to terms with the grieving process. The film’s almost single-minded focus is on the Burke Ryan character, leaving Aniston to try and piece together an underwritten female lead that is essentially a supporting role. Although the actress gives it a try there really isn’t much here to work with and chemistry between her and Eckhart is, to be kind, weak.

Eckhart also has trouble connecting with the heart of a man burning up inside but smiling broadly on the outside. One scene in which the pair tries to set Rocky, a pet cockatoo, free in the wilds does fly, however, and shows the potential the story could have had. The bird in fact steals the movie—probably not what first time feature director Brandon Camp (who co-wrote the script with producer Mike Thompson) had in mind.

Sheen is a welcome addition to the proceedings and scores with a couple of strong scenes near the film’s end, while Frances Conroy does nicely as Eloise’s loony mother. Dan Fogler is well cast comic relief as Ryan’s aggressive manager. Standing out among the doctor’s many followers is John Carroll Lynch as a father still grieving over the untimely loss of his son.

Adult dramas like this are sadly becoming an endangered species among the major studios causing you to want to root for this movie’s success but, unfortunately, Love Happens is part of the problem, not the solution. The film has a 2008 copyright which indicates it may have been sitting around on Universal’s shelves for a while.