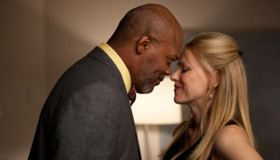 Annette Bening and Naomi Watts lead a marquee cast in filmmaker Rodrigo García's Mother and Child, a slick, ensemble melodrama that appears to touch on every female issue regarding motherhood, family and relationships. With its glittering L.A. setting brought to life by cameraman Xavier Pérez Grobet and production designer Christopher Tandon and an impressive balance of heartache and humor, Mother and Child is an independent drama with strong box office potential among women moviegoers interested in serious fare. The key dramatic roles from Samuel L. Jackson and Jimmy Smits are an important feature, one that may help provide crossover business with male moviegoers. Granted, Jackson and Smits do not enjoy the screen time of their female co-stars. However, their standout performances will help Mockingbird Pictures and Everest Entertainment sell the film as a drama about families and relationships as much as it is about mothers and daughters.

Karen (Annette Bening) is an unsocial spinster who lives with her sick mother and remains obsessed with the baby she gave up for adoption thirty-seven years ago. Unbeknownst to her, that daughter, Elizabeth (Naomi Watts), is a successful lawyer who also lives and works in L.A. Karen and Elizabeth have never met but their birth ties are clear by the human traits they share. Karen pushes back against the friendly advances from a kind-hearted coworker, Paco (Jimmy Smits). Elizabeth's relationships with men are just as unhealthy, demanding total control as she beds her married neighbor as well as her new boss (Samuel L. Jackson). The suspense revolves around whether or not they will ever meet, and if they do, will it fill the holes in their hearts?

Mother and Child 's L.A. setting, ensemble cast and multi-plot dramas draw comparisons to films by masters in the genre: Short Cuts from the late Robert Altman and Magnolia by Paul Thomas Anderson, come to mind. What Rodrigo García does to distinguish his film is give women the spotlight and ultimately raise the melodramatic pitch of their stories. García does not yet match the storytelling talents of Anderson or claim Anderson's bravery for upending genre, but he generates great performances from his cast and takes full advantage of the film's many tearful moments.

Not all of Mother and Child 's subplots are successful. A storyline involving a young couple (Kerry Washington and David Ramsey) looking to adopt the baby of a teenage girl pales in comparison to the stories of Karen and Elizabeth. Still, editor Steven Weisberg keeps García's script coherent and fast moving and for the handful of scenes that stumble, there are many more that hit the emotional bulls-eye.

Naomi Watts is believably troubled and aggressive as a workaholic attorney whose icy façade hides her broken heart. As her story unwinds, and her situation dramatically changes, Watts brings much-needed sympathy to Elizabeth and plays a key role in the film's melodramatic payoff.

Annette Bening is the most pivotal character in the movie, both angry and scared. The memory of giving up her baby for adoption continues to haunt her. Bening needs to pull together all the various characters in the movie and she pulls off the task well.

García, who hones his skills in the ensemble melodrama genre with his previous features Things You Can Tell Just By Looking at Her (2000) and Nine Lives (2005) proves to be a leading filmmaker when it comes to creating substantial female characters and telling mature stories. His technical skills also continue to grow with sequences in Mother and Child that are truly stunning. His greatest stumble may be the film's overlong climax and the fact that, like many melodramas, scenes of heartache often require predictability. It's surprising that García provides few surprises throughout the film, especially at the end.

With the star turns by Watts and Bening and the high possibility of positive word of mouth, Mother and Child looks to be a wise purchase as a specialty release for a distributor looking to add a female melodrama to its slate. Clever marketing that plays up Jackson and Smits will improve chances at wider audiences. Regardless, for García, after years of achieving great success on TV dramas like Big Love and In Treatment, Mother and Child turns out to be his best film and a worthy showcase of his directing talents.