New York, I Love You 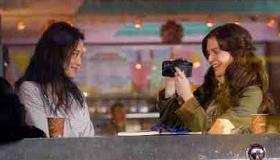 Love is the central theme in New York, I Love You, the second film in the Cities of Love series conceived by producer Emmanuel Benbihy ( Crash ). Partly created as a testament to the enduring beauty and allure of these cities and their inhabitants, and partly as an full employment program for some of the more independently minded directors of the world, the first film in the series was 2006’s Paris Je t’aime. Its themes were similar, though its hues, literally and metaphorically, are darker. New York, I Love You is lighter in almost every way, but this film like the first, is as experimental an artistic endeavor as can be had in contemporary studio level filmmaking, and for that alone it and the series might be well praised. The fact that several of its vignettes, directed by no less than eleven notable (if sometimes infamous) filmmakers are quite good is high praise indeed. The stories range from the abstract to those defined completely by narrative, all woven together such that the transitions (directed by Randy Balsmeyer) are fairly invisible. In fact, bits and pieces of each filmmaker’s work can be found throughout the movie, thus leaving one a little unsure of whose work they are watching at any given moment. It’s a lovely feeling. The result is Art, which hardly ever happens in filmmaking anymore. Unfortunately, filmgoers don’t pay for Art in their movies nowadays, as noted by the fact that they did not flood theaters for the previously mentioned Paris je t’aime. Still that film has become a staple in the DVD collections of cinefiles, and this one probably will too.

The filmmaking here ranges from the banal to the extraordinary. The banal includes the opening sequence, directed by Jiang Wen, which involves a pick-pocket (Hayden Christensen), his target (an even better pick pocket played by Andy Garcia) and a beautiful girl (Rachel Bilson). It’s clever, but only clever. Then there’s the surprisingly poignant segment directed by Mira Nair featuring Natalie Portman and Irrfan Khan about two people living on opposites sides of a deep cultural divide, yet inextricably connected in more ways than they could imagine. Hollywood filmmaker Brett Ratner’s tacky turn about a high school student and his wheelchair bound prom-date features Olivia Thirlby and Anton Yelchin and is—tacky. A segment about a composer struggling with a score and a difficult director starring Orlando Bloom and a disembodied female voice is pure romanticism and is wonderful; Shunji Iwai directs. Actress Natalie Portman’s directorial effort is about perception and love—it’s cute. And so on for eleven segments that add up to one feature film.

By far, the most intriguing and emotionally resonate piece involves the devastatingly beautiful Julie Christie, John Hurt and the young actor Shia LaBeouf. This is mostly intriguing because it is the young Mr. LaBeouf who anchors this vexing and difficult vignette. Juxtaposed to Ms. Christie, whose gravitas is nearly as foreboding as her beauty, LeBeouf not only holds his own but penetrates the notion in director Shekhar Kapur’s powerful, ethereal segment with a knowing that one has not seen in his work before—ever.

There are others, some better some worse, and individual favorites will vary, but there’s bound to be something here for every kind of film lover. Collectively they sum of the parts is not better than any given part, but axioms are a bore, and these parts hold their own just fine—mostly.