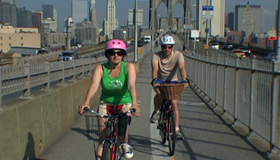 It’s not easy going green: just ask New York City writer Colin Beavan. In November 2006, he and his wife Michelle, along with their 2 year old daughter, became radical environmentalists by adopting the most sustainable lifestyle they could manage. The yearlong experiment wasn’t always pretty or pleasant (among the first items jettisoned: disposable diapers and toilet paper). While tracing an urban family’s eco footprint, No Impact Man provides lessons about the influence of cameras and instantaneous electronic communication—to its own detriment, unfortunately, because it plays like reality TV for the Birkenstock set and in its own way becomes as much of a circus as Housewives of New Jersey or Big Brother. The movie’s usefulness in raising environmental awareness can be debated, but it will leave a faint impression at the box office.

Judging by appearances, you couldn’t draw up a more self-deprecating eco-hero than Beavan. He describes his intentions: “What if I tried not to hurt the environment? What would that feel like?” “Is it possible to have a good life without wasting so much?” To get answers, the Beavans changed their behavior in stages, following the mantra Reduce/Reuse/Recycle. They stopped buying anything in a package. They became locavores, only consuming food grown within a 250-mile radius of their lower Manhattan apartment. Among the things they gave up were caffeine, meat and fish. They didn’t ride the elevator in their building (hoofing it up to the ninth floor) or use any form of motorized transportation—no cabs, no subways. They washed their clothes in the bathtub using natural, homemade detergents; they composted their trash. After shutting off the electricity in their apartment at the seven-month mark, they tried a pot-in-a-pot form of refrigeration.

Serious tensions arose as Colin began blogging about the project and writing his book No Impact Man: The Adventures of a Guilty Liberal Who Attempts to Save the Planet and the Discoveries He Makes About Himself and Our Way of Life in the Process. His efforts attracted a seemingly endless stream of media attention that led to some angry blowback from people inside and outside the established environmental community. His idealistic enthusiasm gave way to depression. He began appearing haggard and malnourished. His naïveté is tempered by Michelle, a reporter for Business Week, who confesses to being a bit of a shopaholic and has trouble adjusting to their new lifestyle. She likens her office to a “Four Seasons” hotel. Her wit and gently sarcastic personality, and the effect of the project on their marriage start to dominate the movie. She is as skeptical as he is sincere, and their relationship, not surprisingly, shows strain, particularly over her desire to have a second child and his reluctance to bring another consumer into the world.

No matter how altruistic his motivations or how much Colin’s decision to publicize his project was designed to raise awareness, it was always going to be a solipsistic endeavor. Inevitably, the project shaped his personal life above all else. Making the experiment so public, including allowing a film to be made about it, was bound to have unintended and uncomfortable consequences. To take one, the more he claims that it’s not about self-promotion, the more suspicious the viewer becomes. In the end, he seems to have learned a humbling lesson that has as much to do with a loss of innocence regarding the media and the medium of film as it does environmental activism. In attempting to control his behavior in a responsible manner vis-à-vis natural resources, he experienced a loss of control.

This holds for the movie itself. In a palpable sense, No Impact Man unravels as it progresses, until you can’t help but read the title as somewhat ironic. By pointing their cameras and microphones at Beavan, seasoned filmmakers Laura Gabbert and Justin Schien helped to shape the his project. The more they get behind his efforts and imply that it’s not a gimmick or a novelty, the more it looks like one; the more the movie presses the question of whether one person can make a difference, the less difference Colin seems to make. That’s the risk everyone involved took, yet Michelle is the one person in the movie who seems to embrace this fact.

Just as there’s no such thing as an innocent fictional or non-fiction narrative, there’s no such thing as an innocent action when it comes to our impact on our environment. As natural as this may be, it does detract from the power of this particular film. The good news is nothing bad happens to their daughter and Michelle remains supportive of Colin, and he of her. The marriage survives and so will the planet.