close
The second time is not a charm 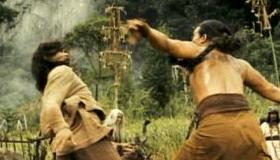 Thai action star Tony Jaa (Panom Yee-Run is his Thai name) aims to outdo his breakout film Ong-Bak Muay Thai Warrior by ambitiously co-directing and co-scripting its follow-up with stunt choreographer and former action star Panna Rittikai, and introducing a new martial arts style called Natayuth to his impressive repertoire. Ong Bak 2: The Beginning is set hundreds of years in Thailand's past with Jaa playing an orphan trained by bandits to become a warrior. Unfortunately, the film fails to match the frantic action and urban, Bangkok-set excitement of the first Ong-Bak movie. Despite elaborate production values including ancient ruins and hordes of rampaging elephants, Jaa's growing fan base will rebel against the film's incoherent storytelling and poorly filmed action scenes. Ong Bak 2 is a perfect example of a sophomore misstep and a powerful argument for action stars to gather more experience before stepping behind the camera. Magnolia Pictures, releasing Ong Bak 2 through its Magnet label, will fail to match the domestic box office from the first Ong Bak movie and quickly lose its stateside Tony Jaa fan base.

Ong Bak 2 's best fight scenes occur near the beginning of the movie with the bandits training their orphan protégé Tiang in elaborate fashion including pools of mud and wrestling crocodiles. Once grown, Tiang is intent on avenging the murder of his parents by local slave traders. Ong Bak 2 offers impressive production design but little of the thrilling stunts fans expect from Jaa.

Martial arts fans will leave disappointed at the film's sloppy choreography. If one were to rank Jaa's three films, Ong Bak 2 would sink to the bottom. In fact, Ong Bak 2 offers half the excitement of the first Ong Bak movie and none of the spark of Jaa's best action movie, The Protector. Perhaps, Jaa's martial arts trademark, Muay Thai, which uses knees and elbows instead of the hands and feet of kung fu, stands out better in a contemporary setting. (In Ong Bak, Jaa played a country boy battling corrupt Bangkok gangsters.) While the army of elephants is impressive in Ong Bak 2, they do get in the way of the man-to-man combat scenes where Jaa performs best.

For Jaa, someone who clearly has impressive martial arts skills, Ong Bak 2 is a bold reminder that he has a lot more to learn when it comes to directing quality action movies. As its co-director, co-writer and stunt choreographer, the faults behind Ong Bak 2 lie mainly with Jaa. Still, his fame as a martial arts hero is strong enough to guarantee the release modest box office from diehard Asian action fans with stronger numbers coming from its home video release. Magnolia is wise to be in business with Tony Jaa. However, the goal should be matching him with a top-notch action filmmaker.