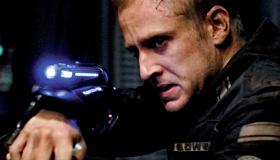 In 2174 with Earth's population nearly 30 billion and irrevocably past capacity, the humans launch the Elysium toward the planet Tanis, which space probes have determined mimics our planet's atmosphere. Years later, flight crew engineer Bower (Ben Foster) wakes up from extended hyperspace screaming, his toes curled under, skin molting, brain gutted by memory loss. It's a rebirth, and director Christian Alvart lays on the symbolism in the oppressive, captivating galactic thriller he co-penned with writer Travis Milloy. Like Danny Boyle's Sunshine, its closest parallel, Pandorum's opening numbers will be modest, but the fright fans and film professors who first venture down this trail of visceral fears will spread enough buzz to keep it in theaters for its own extended flight.

Foster, a lean blonde with small, keen eyes, opens the movie as a one-man show. From minute one, we're sick with dread as he flails about his dark, industrial bunker on the Elysium, ripping hoses and tubes from his arms. His Bower remembers how to read, but has to learn his own name from his pod; he can't even recall the Elysium's exact mission. He's alone and lost. And then, the electricity goes out. (Stretches of the film are lit only by glowsticks.) He's one man in a claustrophobic mystery—a simple, terrible parable of life. Then Dennis Quaid's Lieutenant Payton resurrects and they have each other. But only for a few minutes before Foster clambers into the air shaft to find a way on to the control deck, and the two are from then on connected only by walkee talkies.

Alvart clearly embraces everything feminist and philosophical that film theorists have read into Alien. Foster's journey is full of tubes and shafts and tight canals. Though the ship is all steel and rubber, it feels alive. Wires and hoses coil around the men like they're in an industrial rain forest. And with the entrance of the Elysium's other survivors, the eco-fable reaches for more and more heft. On the ship are spiky, humanoid cannibals who like to feed off the newly-hatched when they wake up from their long sleep—they're still screaming in confusion when they're screaming for their lives; they're the prey of this new ecosystem. Those who live long enough to hide have learned that it's a kill-or-be-killed world. This isn't a film with a scrappy band of rebels—loyalty is foreign and everyone leads a fiefdom of one. Foster's journey through the ship has all the elements of a classic odyssey: everyone and everything he meets is symbolic from the European biologist (Antje Traue), to the South Asian farmer (Cung Le), to the African hunter (Eddie Rouse). And running under the surface is the continual threat of meeting someone with Pandorum, the space madness syndrome that killed everyone in an earlier ship named the Eden.

Add that name on the pile, and you start to wonder if Alvart has added so many layers to Pandorum that he's weighing down his themes. A final battle crosses the line when it stops just short of name-checking Descartes—by then, the film has tried so hard to knock us out with its brains that it feels like that pretentious snob from Columbia you met at last week's cocktail party. Instead of feeling fresh, it feels fetid. But couple that with the flick's suffocating gloom and you have a thriller that clings to you even in the light of the theater lobby. In just under two crushing hours, Alvart and Milloy have taken us from one man in the darkness to a dark film that grazes the very nature and mystery of existence. They don't have any answers and they have precious little hope, but the fear is out there and anxious for a sequel.