close
Better tagline: In the foam, no one can hear you scream. 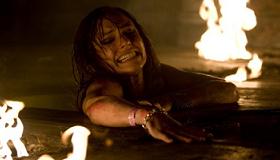 Stewart Hendler's flick about a cabal of college seniors who purposefully-on-accident murder their sorority sister looks like a lurid genre thriller. It's actually a subversive genre comedy, and a pretty hilarious one, at that. But the horror fans stumbling into my midnight screening were likely looking to catch a more boobtacular Prom Night and were so caught off guard by Hendler and the three-man writing team's dead pan humor that lines like "We're Thetas. So lets go wash the blood off in the lake and go back to the party," were met with only hesitant laughs. Audiences might not clue into Hendler's wavelength in time to salvage the theatrical release, but I pledge Sorority Row could get a cult following on DVD.

At a pajama jammy jam where everyone's downing Jell-o shots in their skivvies (the sole girl in long underwear has thoughtfully unbuttoned her back ass flap to jump on the trampoline), awkward bookworm Ellie (Rumer Willis) and girlfriend-of-the-valedictorian Cassidy (Briana Evigan) are nursing their beers and wondering how they're going to manage another 8 months under the reign of Jessica (Leah Pipes), a blonde mean girl who holds everyone in her thrall like the Sorority Prison Experiment. "I love you because you've made being a bitch an art form," is what passes for compliments among the Thetans, who also include hot bimbo Claire (Jamie Chung), bulimic boozer Chugs (Margo Harshman) and the recently romantically thwarted Megan (Audrina Patridge). Jessica has come up with a plan to help Megan fake an overdose after Jessica passes Megan's estranged boyfriend Garrett (Matt O'Leary) some pretend roofies. Once he's flipped out, Jessica enlists the girls to maintain the ruse for a drive to an abandoned construction site where they'll ratchet up the tension by telling him he has to chop up the body for disposal. "You cheat on one Theta, you cheat on all Thetas," they vow. But when Garrett charges forward with the first fatal cut, the sisters realize only two of their sacred oaths matter: secrecy and solidarity.

Like Paul Verhoeven's Starship Troopers, this is a satire made for cult rediscovery. The main distinction is it's taking shots at an easy target. The flick is merciless towards nearly all of its characters, particularly Chugs, who channels her guilt and grief into a pills and promiscuity problem that's got her merely rolling her eyes when her creepy psychiatrist demands she give him some action for a fresh stock of Vicodin. (They play a game called 'Catch me, Rape Me.') In other hands, she's an after-school weepie. Here, her problems are the stuff snide jokes are made of, even to the graduation gown-hooded killer who avenges himself on her first. (Cause of death: Deep-throating a vodka bottle.) Jadedness and cynicism flow like Miller Lite down a two-story beer bong. The bleachy, slo-mo cinematography makes the film seem more grim than it intends, but Hendler doesn't seem that interested in scares—he'd rather make us laugh when Chugs sends a from-the-grave text to her frenemies that reads:

Change the tagline to "In the foam, no one can hear you scream," and audience will be cued to crack up at Pipes' magnificent uber-bitch and house mother Carrie Fisher's last great stand against the tire iron-wielding mass murderer. Like a tray of Jager shots, this is bitter, strong, unapologetic junk that will help you merrily waste time and brain cells.