close
A fulfilling family drama from the male perspective

The Boys are Back 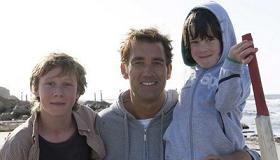 After a couple of commercial disappointments in the first half of 2009 ( Duplicity, The International ), Clive Owen has returned to his indie roots, delivering a moving and unforgettable portrayal of a man suddenly forced to pick himself up by the bootstraps and become a single parent. Based on a true memoir, The Boys Are Back is a richly emotional and heartfelt drama that should strike a strong chord with discerning movie audiences around the world. Awards attention, particularly for Owen, could help spark some box office interest and keep the picture going through the fall season.

Inspired by the memoir of Simon Carr, the film version has been only mildly fictionalized (the names are changed, but not much else) in its transfer to the big screen.
Carr, now Joe Warr (Owen), is a sportswriter living in Australia, divorced from his first wife and now re-married to Katy (Laura Fraser) and living with their son, Artie (Nicholas McAnulty). Meanwhile, Joe’s older son, Harry (George MacKay), lives in London with his mother and has become estranged from him. When Katy suddenly dies of a fast-moving cancer, Joe is left with an agonizing void in his life but also with the determination to bring up both his sons and forge a family again despite great odds and less than excellent parenting skills.

Adding complications is the arrival of his mother-in-law, Barbara (Julia Blake), who doesn’t go easy on Joe when it comes to bringing up the boys. Despite lingering resentments about the divorce, Harry, who is visiting, desperately tries to create a new relationship with his dad. Bringing a warmth and perspective to everything is a sweet and understanding neighbor, Laura (Emma Booth), who provides some balance to the equation.

The film, nicely directed by Scott Hicks ( Shine ), is a sharp family drama from the male perspective that gives Owen a chance to show what a fine actor he can be with the right material. Allan Cubit’s beautifully nuanced screenplay changes the location of the actual events from New Zealand to Australia, Simon’s name to Joe and his job from political to sports writing, but the essence of Carr’s splendidly written memoir is still intact, even as other incidents are tinkered with.

Among the supporting cast, both boys are superbly cast with MacKay as the angst-filled Harry (a real discovery). Emma Booth is lovely and veteran Julia Blake has some fine, tension-filled moments as Barbara.

The relatively rural Australian setting is ideal for a story in which the space between the characters seems so essential. The Boys Are Back rings true, and in its own simplicity and authentic nature turns out to be not only Scott Hicks’ best film since Shine, but also one of 2009’s most satisfying and rewarding movie experiences.