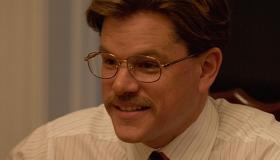 After taking the revolutionary road with Che, Steven Soderbergh opts for a more modest scale enterprise based on the true story of an industrial whistle-blower. This satire, however, remains rather muted and not dark enough, while the investigative elements lack edge. Still, the stellar presence of a bulked up Matt Damon should give it legs with audiences who appreciate a little social conscience in their media.

Mark Whitacre (Matt Damon), who suffered from a bipolar condition, assisted the FBI over a period of three years by gathering information about the food company, Archer Daniels Midland, who tried to fix the price of a food additive. It’s gruesomely fascinating to watch him spiral out of control as he tries to bring down the company.

At the same time he was taping his co-workers and attending meetings around the globe he managed to defraud the company itself to the tune of some $9 million. If it had not been for his own misdemeanors, he might have been hailed as national hero instead of going to prison for considerably longer than the top brass he had helped to convict.

Rather than opting for a purely investigative approach, Soderbergh decided to go for a freewheeling satirical slant to represent the bizarre events. Whitacre’s delusions of grandeur grow to ridiculous proportions—apparently he was the highest-ranking executive ever to blow the whistle on his company in US corporate history.

Set in the early ‘90s, Soderbergh suffuses it all with a Marvin Hamlisch score, which lends a certain nostalgic feel.

Damon physically embraced his role by piling on the pounds—and this isn’t the first time he’s taken to a character that is not what he appears. He carries the film with considerable aplomb but he is also surrounded by some lively comedic performances from the likes of The Soup host Joel McHale and Scott Bakula as FBI agents.

Soderbergh has delivered a mildly entertaining confection here but it lacks the bite and depth you might have expected from such explosive subject matter.