close
Yes, honey, you have gained some weight

The Invention of Lying

on September 17, 2009 by Barbara Goslawski
Print 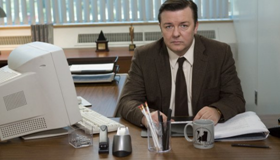 The Invention of Lying is as hilarious as anything comedian Ricky Gervais has created to date. Working with Matthew Robinson on their feature film debut, the writing/directing team present a sparkling utopian universe in which no one knows how to lie. This film is loads of fun and boasts an all star comic cast, featuring Gervais with Jennifer Garner, Tina Fey, Louis C.K., Jonah Hill and Rob Lowe. Their spirited interaction with this clever script is worth the price of admission alone. This film will be a hit.

The Invention of Lying is typical Gervais fare, kicked up a notch. The creator of The Office and Extras creates his own hilarious variation on Pleasantville. Everyone is so nice in this film that their brutal honesty is such a shock. But that’s the reality of living in an idealistic world devoid of deception. That’s where Gervais’ comic genius always resonates—in that clash between the noble notion and its base reality.

For the first thirty minutes or so, the film zips by on this shock value alone and then it hits a snag. This gag is too thin to sustain a film so we wait for Gervais to get to the heart of the matter, the actual invention of the first lie. It’s a bumpy shift in gears, one that threatens to lose you, but the film valiantly picks up and carries on.

That first fib is an innocent mistake really, but one that carries such great satirical effect. Mark Bellison (Gervais) is at his wit’s end: he’s a scriptwriter for a company that produces historical epics. But without any notions of fantasy, and saddled with a century known only for the spread of the Black Plague, Mark’s future is grim. His personal life is in a shambles and he discovers the healing effect of using his imagination. And Gervais manages to create a classic comedic moment in modern cinema, using biblical references and a couple of pizza boxes.

Of course, his statements are accepted as reality. Remember, this is a world of facts. When word gets out about this new truth, the effects on this perfect society are enormous. Everyone wants to know more, everyone wants to believe, even though technically it’s a fantasy.

Gervais not only manages to skewer notions of organized religion, he reveals the undeniable need for a belief, for a fantasy world, for something that goes just beyond the facts. The world of truth is actually a harsh world, one that provides no relief from the relentless jabs of reality.

Always one to go beyond appearances and to shatter idealistic notions, Gervais does a fine job of skewering the concept of honesty. Nice idea but the reality is quite different isn’t it? Everyone’s very nice and it’s great that you can trust them, but isn’t it kind of disconcerting to hear yet again that that dress really does make you look fat?