close
A minor piece of work 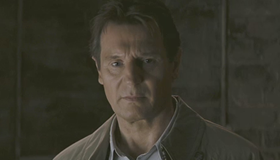 Five years after Kinsey, Liam Neeson and Laura Linney reunite as a married couple in Richard Eyre’s slender romantic drama. When you count the Broadway production of “The Crucible” Eyre directed in 2002, it’s the third time they’ve played husband and wife opposite one another. A serious-minded tale featuring middle-aged characters should be a tonic to filmgoers after the popcorn season, but this British production causes figurative indigestion much in the way Atonement did. Notwithstanding sympathy for recent widower Neeson, plus the desire to see him paired again with the estimable Linney, The Other Man will pass through theaters quickly and largely unnoticed.

Based on a short story by German writer Bernard Schlink, whose novel The Reader came to the screen last year in an overrated adaptation, this narrative hinges on two revelations that come off rather awkwardly and feel borderline preposterous. Linney’s Lisa is a shoe designer and her hubby Peter is the founder of a successful software company. They lead very different professional lives yet their marriage has prospered for nearly three decades. They own an exquisite Georgian pile in Cambridgeshire and, although Peter doesn’t approve of her taste in men, their daughter Abigail (Romola Garai) seems happy with her scruffy boyfriend.

During a post-fashion show tête-à-tête, Lisa queries Peter about whether he’s ever felt tempted to cheat on her. She pretends it’s a theoretical discussion but of course that’s rubbish. She’s in a speculative, wistfully distracted mood that probably signals guilt. The audience links this conversation to the title sequence, which featured Lisa and an unseen man riding in a motorboat on a misty Lake Como. As the married couple makes love sometime later, Lisa appears to confess to having a lover. Next thing we know, she’s gone. Evidently having followed through on a remark made over dinner to the effect that if she were to ever leave Peter, she would just go without taking or asking for anything.

Thus commences a one-sided game between the two gentlemen, often while playing chess in a Milan café and eventually moving to Lake Como. Peter doesn’t reveal his identity and his intentions are unclear. (If Ralph had seen Taken he’d quiver in his cosmopolitan, gigolo loafers.) A concerned Abigail travels to Italy hoping to stop her father from doing anything rash or destructive. I for one would have preferred a violent outburst over the rather silly turn of events wrought by this emotional ménage à trois.

Eyre and his Iris collaborator Charles Wood adapted Schlinck’s story, transposing it from a German town to more cosmopolitan and contemporary settings. They aren’t able to mine much psychological complexity from any of the characters or the scenario however, and it comes off as gimmicky. It boils down to Lisa’s need for two different men, representing two different approaches to life—romance and realism. Ralph is a dreamer, an aesthete who “pretends everything is better than it is” whereas the grounded Peter represents stability. Since none of the characters is fleshed out, we must take this dichotomy for granted. The father-daughter relationship feels the least pro forma thanks to Garai’s sensitive turn. (Notching this on her filmography won’t do her career any harm.)

As for the adultery theme, Peter poses an interesting question: “What’s worse: that someone is a different person or the same person when with another man?” Like most everything else in the film, this idea never takes hold. Eyre was an executive producer on Atonement, which co-starred Garai and which features a somewhat similar narrative twist carried out at the viewer’s expense though on a much grander scale. That may explain his attraction to and handling of the source material. The resulting piece lacks the poignancy of Iris or the feral quality of his Notes on a Scandal. Although the use of close-ups gets redundant, the production values are adequate. Eyre’s inability to elicit anything special from his triangulated leads is the biggest disappointment. Neeson grimaces and frowns while staring at Ralph or various computer screens. Banderas offers a parody of his Shrek persona “Puss in Boots,” and Linney doesn’t have enough screen time to be anything other than a cipher.

Near the end, Peter issues this verdict on his romantic rival, “Appallingbut also rather wonderful.” Applied to the film itself, he’s half right. More than once Peter is urged to let his obsession with Ralph go and that’s good advice for moviegoers debating whether to spend time with The Other Man.