close
A thin doc about a full education 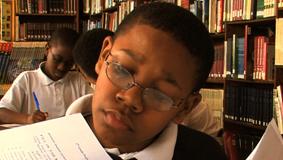 The Providence Effect is a puff piece that trumpets the success of a Chicago K-12 school that turned independent thirty years ago. Providence-St. Mel’s achievements are truly laudable, but its inspirational lessons get watered down by the uncritical approach taken by director/producer Rollin Binzer. The doc’s implicit agenda concerning how we should allocate educational resources—namely, away from public systems and toward the private and charter models—is tendentious to say the least. The school and its dedicated staff deserve the maximum number of gold stars, far more than the movie itself. Short of making it mandatory viewing at the next NEA convention, it seems destined to reach only pre-selected audiences.

The film is the debut production of a new company named Dinosaurs of the Future, a company devoted to making feature documentaries that focus on “educational opportunities for all children,” and the idea that “the education of all children is in the best interest of all.” Located in the Garfield Park neighborhood on the West Side of Chicago, Providence-St. Mel is an ideal first subject. It was part of the Catholic Archdiocese of Chicago until 1978 when Church officials decided to close it and Principal and former civil rights activist Paul J. Adams III bought it, raising the necessary funds from donors, and established a not-for-profit independent school. The results have been remarkable given the litany of inner-city problems plaguing the neighborhood. Adams’ goal of removing his predominantly African-American students from poverty and training them to be “competitive globally” was recognized early on. Ronald Reagan visited twice during the 1980s and President Obama has also paid tribute.

Adams, now school president, is profiled and his educational philosophy sketched out and enforced by testimonials from alumni. Current principal Jeannette M. Dibella is also interviewed at some length. She has overseen the incorporation of a failing public elementary school in the area, now called Providence Englewood Charter School. Their common sense approach to all aspects of education appears so simple and straightforward that you begin to worry it may be too good to be true.

Binzer’s laissez-faire methodology enforces the impression that Providence-St. Mel is a pedagogical Shangri-La. He appears to take what he’s told at face value and doesn’t ask any difficult questions (for instance, the admissions policy is never discussed). Nothing negative is seen or heard. Among the key issues overlooked is the faith component; Christianity animates the school philosophy, but the topic remains unexplored.

As it unspools, The Providence Effect begins to sound more and more like a sales pitch and what’s being peddled is a model for “revamping all of American education.” Whether the success of this exemplary institution can be repeated elsewhere is a thorny proposition and far from certain. The film has the potential to ignite dialogue about school reform, yet its implied criticisms of other approaches require sifting through. Issues surrounding class size, teacher and parent accountability and funding are all glossed over. As an argument for private over public education, the movie feels like an attempt to dazzle with one success story, thereby blinding the viewer to the tough questions that need to be addressed and the hard work that must be done. The Providence effect is one thing, how to achieve it is quite another.