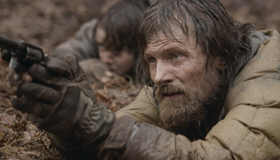 The Road makes the Oscar winning No Country For Old Men seem positively hopeful. This bleak and unrelenting adaptation of the Pulitzer Prize winning bestseller by Cormac McCarthy is an emotionally intense, riveting and overwhelmingly powerful look at a man and his young son travelling a long road while trying to survive in a post-apocalyptic world. With an outstanding lead performance by Viggo Mortensen and impressive production values this earnest and engrossing film will have to count on strong reviews and awards attention to lure reluctant audiences into the multiplex, but with the pre-sold value of McCarthy’s tome (one of Oprah’s book club recommendations), this long-delayed release could be a decent performer in a thin fall season. Fest exposure at the Venice, Telluride and Toronto film festivals will probably help.

Although the movie’s landscape is not as grey and ashen as the nuclear winter suggested by the book, this end-of-days story is still very dark indeed. A cataclysmic event either caused by nature itself or nuclear war (it’s never stated) leaves few survivors to live out their days on an endless road with only a few remnants of the society that once existed.

Ten years later, a man (Mortensen) and his 12 year old son (Kodi Smit-McPhee) make their way along the road, occasionally running into others including a wise old man (Robert Duvall), a veteran (Guy Pearce) who befriends the boy, a thief (Michael K. Williams) who tries to ransack their things and a motherly woman (Molly Parker) who turns up near the end offering a the boy a good dose of much needed warmth. The film details their continuing journey as they take on different paths. Charlize Theron turns up in flash backs as Mortensen’s wife who took her own life knowing what was going to become of the world. These sequences add a strong emotional layer for Mortensen to play in addition to the survival mode he’s in for most of the running time.

Director John Hillcoat ( The Proposition ) and writer Joe Penhall have crafted an effective cinematic vision of McCarthy’s reportedly “unfilmable” book. Particularly effective is a sequence involving Mortensen, Smit-McPhee and Duvall as three distinct generations of humanity who come together for a rare moment of understanding as their world crumbles around them. Duvall is in for only one scene and is unrecognizable but especially poignant and commanding his few moments onscreen. Pearce is also effective as the Veteran they run into. Young Australian actor, Smit-McPhee is refreshingly unpretentious as a kid who has to grow up fast and plays wonderfully off a magnificent Mortensen who is rugged and ultimately quite touching as a father unwilling to let go. Theron is fine in her few scenes but the flash backs are not where the heart of this tough-minded film lies.

The story, given added power as a metaphor for a frightened post 9/11 world, is a worthwhile one for unflinching audiences who can handle it. Like 1983’s similarly bleak and hopeless Testament, this is not exactly what you would call escapist fare, but nevertheless a horror story that in its focus on the last vestiges of humanity remains worthwhile and ultimately very moving.

Make sure to check out our interview with John Hillcoat here