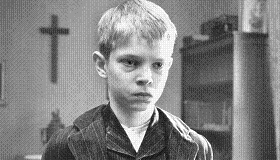 Set just prior to the start of the First World War, this Palme d’Or winner by Michael Haneke explores the quiet life of a small German village mysteriously eroded by a series of inexplicable events. The film is an intriguing puzzle that should ensnare the equivalent volume of viewers who flocked to see the same director’s Caché, The Piano Teacher and Funny Games. Critical approval, Haneke’s following and the Palme d’Or win from Cannes should make it a no-brainer for upscale arts venues.

Austrian director Michael Haneke has forged a reputation for hard-hitting films that push audiences to the limit and beyond. Here, Haneke relates his absorbing thesis through a choir in a Protestant village in northern Germany on the eve of the First World War.

Shot in austere black and white, Haneke depicts apparently pointless crimes that are visited on the rural community. But who are the culprits? Could they be the village children themselves? If so, these kids could become the monsters unleashed on the world in the decades to follow, bringing with them the horrors of National Socialism and the shadow of the Swastika.

With its lengthy running time and a plethora of characters weaving in and out, it could almost have been a mini-series, but it is all woven together by means of a traditional voice-over (narrated by an old man, played by Ernst Jacobi). It pulls viewers in with the power of its imagery and the brooding sense of impending menace. (The great Jean-Claude Carrière collaborated with Haneke on the script and structure.)

Haneke has had the project in mind for over ten years. He was interested in presenting a group of children who were taught absolutist values, and the way they internalized this absolutism. Haneke has said: “My point was to show the consequences—that is, all sorts of terrorism. If absolutism is applied to an ideal, then that ideal, either political or religious, becomes inhuman. I had considered calling the film "The Right Hand of God." These children believe they are the right hand of God: they have understood the laws, and follow it to the letter. This makes them become the punishers of the others, who do not obey the same ideals.”

In the mix are to the town’s aristocratic landowner, The Baron (Ulrich Tukur), and his wife (Ursina Lardi), the self-righteous pastor (Berghart Klaußner contributing one of the most memorable performances) and two of his long-suffering offspring Klara (Maria-Victoria Dragus) and Martin (Leonard Proxauf) whom he forces to wear white ribbons as a reminder of purity and innocence.

Other characters finding their way through the fray include the doctor’s housekeeper and lover (Susanne Lothar) and the daughter whom he abuses (Roxane Duran), the steward of the baron’s estate (Josef Bierbichler) and a local farmer (Branko Samarovski).

Haneke peels away the layers and reveals the common threads that unite these disparate characters who all appear to be suffering from physical, emotional and sexual abuse in one way or another, either as victim or perpetrator.

The film ends on the eve of the onset of the First World War—but already the seeds have been sown for the wave of popular support that created the climate for the rise of Hitler and the eventual outbreak of the Second World War.