Tyler Perry's I Can Do Bad All by Myself 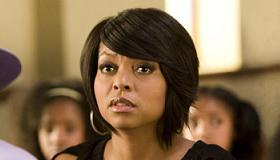 The Tyler Perry machine keeps rolling along. His eighth feature, the second released this year, resonates with a revival spirit thanks to its luminous star Taraji P. Henson, who’s backed by Mary J. Blige and Gladys Knight. Despite a plot that’s arguably Perry’s most predictable, I Can Do Bad All By Myself is genuinely affecting when the gospel spirit takes hold and is a marked improvement over his last two pieces of moral burlesque. Up against fearsome animation ( 9 ), co-ed horror ( Sorority Row ) and a frozen thriller ( Whiteout ), it appears well positioned to earn plenty of coin.

On the heels of her Oscar-nominated performance in The Curious Case of Benjamin Button, Henson brings a trifecta of beauty, humor and pathos to nightclub singer April, a not-so-nice lady who sings the blues every night, drinks to excess and then sleeps the days away in the dilapidated house where she’s kept by a married man. Across town, Madea and her brother Joe (both limned by Perry) are roused one evening by sounds of breaking and entering. The perps happen to be April’s 16 year old-niece Jennifer (the impressive Hope Olaidé Wilson) and her two younger brothers. Their late mother, April’s sister, was an addict and the kids’ grandmother, from whom April is estranged, is raising them. Granny hasn’t returned home from work in four days, however, and the sibs are desperate. After feeding and berating them, Madea drives the youths to April’s in her brown Cadillac, agreeing not to involve the po-lice if they do some work around her house.

Conveniently, April’s abode is a stone’s throw from her mother’s place of worship, Zion Freedom Baptist Church. Pastor Brian (played by real-life Detroit minister Marvin L. Winans) is not only concerned about a missing member of his flock and her wayward daughter, he also looks out for a Mexican handyman named Sandino (Adam Rodriguez, CSI: Miami ). Sandino needs a place to live while doing odd jobs at the church and before bleary-eyed April can stop him, he moves into her basement and starts fixing up the place in exchange for room and board. It’s immediately clear his main project will be working on April’s heart, both in a romantic sense and in order to tenderize it vis-à-vis her niece and nephews, whom we know she’ll take in permanently once she confronts the piggish behavior of her adulterous boyfriend.

Based on Perry’s stageplay I Can Do Bad All By Myself —the first work in which the Madea character appeared, incidentally—this no-frills tale of redemption suggests logic is a luxury when a woman needs saving from her own selfishness, or from the evil men have done and continue to do to her. Music and an empathetic hombre are the keys to healing April. Ms. Knight’s church lady performs a pair of soulful numbers and Rev. Winans belts out an extremely powerful gospel hymn. In her role as April’s friend and co-worker, Ms. Blige dispenses advice and performs an eclectic tune “I Can Do Bad” that she wrote especially for the film along with Chuck Harmon and R&B sensation Ne-Yo.

Courtesy of its gospel vibe and Henson’s charisma, this is a surprisingly entertaining morality play—one spiked with a little rap, a little Motown and of course Madea’s naughty shenanigans. I’m of the opinion that you can never have too much Madea. Still, given all the hats Perry wears it’s no wonder she drops out about halfway through the action (her peak being a hilariously convoluted Bible lesson imparted to Jennifer). I Can Do Bad All By Myself is the first feature film shot entirely at his brand new Atlanta production facility, Tyler Perry Studios. He was probably too busy to keep Madea front and center, but by training the spotlight on talents such as Taraji P. Henson, Mary J. Blige and Gladys Knight, Perry demonstrates why he’s such a popular showman.