on September 11, 2009 by Cathleen Rountree
Print 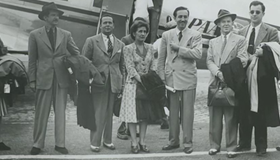 By 1941, Mickey Mouse, Snow White and the Seven Dwarfs, Pinocchio, Bambi, and Fantasia had already established Walt Disney and the Disney Studios as a preeminent artistic and cultural presence, both at home and abroad. Still, the business found itself four million dollars in the red and suffering the effects of an animators’ labor strike. Walt & El Grupo, which premiered at SFIFF spring 2009, recounts the story of Walt Disney's 10-week journey to the Latin “ABC”-Argentina, Brazil, Chile; plus Uruguay and Peru-in mid-1941 as part of the "Good Neighbor" program sponsored by the U.S. State Department. Given the international popularity and ubiquity of the Disney brand, Walt & El Grupo stands a better than fair chance at domestic theaters and will undoubtedly find an eager audience in Latin America, especially in the countries represented in the film.

Roosevelt’s Administration had growing concerns about Nazi and Fascist influence in Latin America and provided a budget of $500,000 (plus a guarantee on any films made from the venture) to Disney, who handpicked a crew of 16 of his most talented artists, illustrators and animators for the de facto diplomatic mission. The artists undertook months of research and planning before their departure date, and they appeared sincere about engaging the different cultures and learning from them.

As the son of legendary Disney animator Frank Thomas—a member of “El Grupo”—documentary filmmaker Ted Thomas had enviable access to archival materials, including 16mm color footage of the adventure, participants’ letters and journals—read aloud by surviving family members—and often poignant reminiscences from Latin Americans (and their descendents) who met and interacted with Disney’s entourage.

The film highlights the overlapping of art and politics between Disney’s mini-traveling studio and their South American counterparts, with whom they exchanged ideas. Given that the Walt Disney Family Foundation financed the documentary, it’s no surprise that Disney, the genius, is presented in the most flattering light imaginable.

However, one of the film’s truly bizarre revelations maintains that, not only was Walt Disney frozen after he died, he was (gasp) a spy ! Apparently these titillating tidbits (or urban myths, as people on the street call them) still capture the imagination of “90 percent” of the Argentine population. But, alas, the film assures us, they turn out to be simple extensions of Disney’s “fantasia.” And it holds moments of genuine candor. Although the government instructed the group not to identify themselves in any way with their government sponsor, it was obvious to Argentine Jorge “Faruk” Palacio—who met Disney during his trip—that: “It always happens that the countries at war try to influence those that are not in the war to take their side, water for their well.”

James Wesley Stemple’s soundtrack establishes an aural geography from country to country, and the music that delighted and entertained El Grupo also charms us. Thus, Brazil imparts the limber, sensual beats of samba, tango riffs underscore the Argentina segment and Chile and her Andes are represented by whispery panpipes tunes. Classic songs that were popular in South America in the early 1940s, such as “Brazil” gained international popularity through the subsequent Disney film Saludos Amigos. Vocals are as diverse as Carmen Miranda and Mercedes Sosa.

Beyond the upbeat music, the nostalgic family remembrances, the vicarious fascination with travel to what were still considered “exotic” countries 60 years ago and the lush travelogue quality of the cinematography, Walt & El Grupo provides a framing device for the Disney creative process as well as the issue of the place of art in geo-politics. I mean, imagine sending a Pixar crew on a “Good Neighbor” mission to Iran!