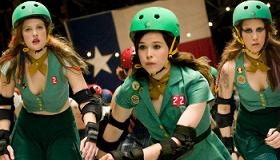 Spraying territory Hollywood actresses haven’t touched in over 35 years, Drew Barrymore makes a solid feature directorial debut with this film, guiding a group of game femme stars through the grit and glory of the Roller Derby in Whip It. This sly comedy should appeal to guys just as much as the target female audience. Headlining is Juno ’s Ellen Page as a disgruntled, perennial, beauty queen runner-up who takes to the track for a true lifestyle change, this coming of age on-wheels tale should draw good word of mouth and respectable grosses throughout the fall.

Women’s roller derby hasn’t surfaced as the core of a mainstream Hollywood movies since 1972, when Raquel Welch slipped on a pair in the largely forgotten camp classic, Kansas City Bomber. Working off a far better premise, tyro helmer Barrymore wisely plays up the heart and soul of the ladies in the sport, particularly the rookie Bliss Cavendar (Page), the teen around whom the story revolves. Not pregnant this time as in Juno, Page is still playing a young offbeat girl searching for life’s answers and finding them in an unlikely alliances. Forced to live up to her mother’s (Marcia Gay Harden) misguided dreams of beauty queen crowns, Bliss and her sister are dragged by Mom from one miserable local pageant to another with little real success and even less satisfaction. When the opportunity arises, small town Texas castoff Bliss jumps at the chance to get secretly involved in the roller derby in nearby Austin, where she eventually gains some star status. There she becomes part of the rag tag group of tough, fun-loving female skaters, dabbles in the boyfriend game and finds the self-esteem she lacked.

The script, adapted by Shauna Cross from her own somewhat autobiographical novel, Derby Girl, gets the feel of growing up in a dead-end Texas town just right. Cross’ own experience as a derby girl pays off here and it was a wise move to let this novice screenwriter adapt her own work. Barrymore grew up in the movies and clearly has learned from the best, including her E.T. mentor Steven Spielberg. She effortlessly brings the story to life on the screen and, in fact, shows a flair for action with the gripping Derby scenes.

Page is again superb, as is Harden as her determined and frustrated mother. Barrymore takes on a nice supporting role as one of the “tribe,” Smashley Simpson, but fellow skaters Juliette Lewis as Dinah Might, along with SNL ’s Kristen Wiig as Malice In Wonderland, take acting honors among team members. Also standing out is Eve as Rose Sparks, Ari Graynor as Eva Destruction and Zoe Bell as Bloody Holly. It’s worth the price of admission just to hear these names! Among the few men in the main cast, Daniel Stern is warm and wise as Bliss’ father, and Jimmy Fallon has some fun bits in his brief moments as the track announcer. Landon Piig does nicely as a brief love interest.

In this realistic but highly entertaining story that travels to two extremes of the female experience, Barrymore has made a highly promising debut behind the camera and created a first-rate, funny, heart-filled and totally winning entertainment that not only rolls, it rocks.