close
An interesting kind of colorful 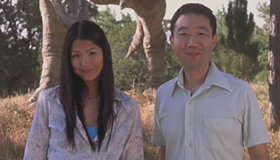 A wry and playful indie comedy about a divorced, middle-aged, immigrant trapped in arrested development, White on Rice forages on well for the first two parts and peters into inconsistency and cliché in the final act. The “highlight of Hajime’s (Hiroshi Watanabe) career” was a role in Ambush at Blood Trail Gate, a B-rate samurai film shot back home in Japan. Since that relative success, he’s been trapped in the awkward/fantastic aesthetic of faux-feudal Japan like a fly in amber—appropriately, he’s got an affection for dinosaurs to match his own still life like condition. From the title, one would assume a more direct critique of culture and Asian identity, but White on Rice handles identity less like a subject to mine and more like a context. As such, the jokes are light and the conflicts, weightless. Platforming will begin in LA and expand to NY and San Francisco. Getting word out on this title seems difficult but its appeal is broad and the humor, inspired by Sunday morning comic strips, will play well to lots of audiences. Numbers could, if investment is made, be upbeat.

Hajime (aka Jimmy) left Japan after he ran out of food: when his wife left him she knew he’d be helpless so she prepped dinner for three months. Lacking a place to go, he went to his sister in the states. Aiko (Nae) lives with her older husband and their son, Bob (Justin Kwong). The parents work to the neglect of their son and, as a result, the kid has built himself a tiny career landscaping after school and makes enough to fund super secret piano lessons. Bob is largely silent, and if he were a comic strip character he’d be Charlie Brown. While Bob is a minor savant, Jimmy is a major moron, making dinner in the midday and then leaving it and a disaster area on the stove to catch fire while he naps. The extent of his stupidity is constantly surprising, sometimes to the point of disorientation. But that’s a major source of the laughs for this title, and fortunately the absurdity never appears out of place. Jimmy isn’t ready for wife number two but nonetheless runs screaming from the girl who’s so obviously and perfectly dropped in his lap. Instead, he pines for a girl who’s a universe out of his orbit—a doctorate student and his coworker’s ex-girlfriend. She tries to play nice, but it’s clearly not easy for anyone to tolerate a 41 year old adolescent.

Jimmy appears to stay with Aiko and her family out of more than charity. A major trend among the characters is their interdependence. Aiko’s husband, Tak (Mio Takada), used to be “fun”—at a loss for that fun in her life she keeps her kidlike brother around. Bob is neglected, so he finds ways to excel in private, upsetting no balances in the process. Jimmy wants a girlfriend but can’t man that search well so he chooses the most incompatible mate possible—you know, to fail at that too. So far as character development is concerned, the film is all aces, but by the time we reach the third act, a car chase destroys the pace the film has kept consistent from the opening shot and all the wacky events that befall the characters begin to feel out of place. Still, its tone is pleasant and its humor, charming.