close
This one’ll get left out in the cold 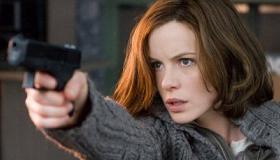 In these risk-averse days when the fastest way to the big screen is through a comic book store, there’s still something to be said for, maybe, properly sizing up the material before deciding whether still drawings deserve full-motion cinematic treatment. Greg Rucka’s 2001 graphic novel Whiteout was well-received but, if director Dominic Sena’s plodding and insignificant adaptation is any barometer, it’s hard to imagine why. Still, one must assume that Rucka’s original is better than this, but only because most things are. Kate Beckinsale, always two steps away from becoming the poor man’s Jennifer Connelly, plays a Federal Marshal hiding from a tainted past at a research station in the frigid wilds of Antarctica. The mysterious death that triggers her curiosity will do the same for precious few moviegoers. Figure a mild opening followed by Warner Bros waiving their proposed 28-day delay between the DVD streeting and becoming available at a dreaded $1 rental kiosk. Anything to goose the numbers for what is essentially a stinker.

If Christopher Nolan’s Insomnia represents the top-shelf telling of a law enforcer investigating a murder in a strange, cold land, Whiteout is the version one finds at the bookstore closeout bin. Sena, who hasn’t directed a motion picture since 2001’s Swordfish, announces his limited intentions in the first five minutes when US Marshal Carrie Stetko (Beckinsale) strips down to her bra and undies, then bends over and shows the audience her taut behind as she steps into the shower. Stetko has spent the last two years stripping and bending over at the Amandsen-Scott research station in Antarctica, six million square miles of lethal, God forsaken cold. Presently however, the residents of Amandsen-Scott are a happy lot, since a plane is arriving to rotate them the hell out of there. Also departing is Stetko, now recovered from a traumatic event in her crime-fighting past in Miami (where, you see, it’s hot) that compelled her to accept a posting in Antarctica (where, you see, it’s cold). What happened to Carrie in Miami plays like a cut scene from the videogame Grand Theft Auto, except completely unimaginative and poorly-written (don’t tell us the bad guy has disappeared—we see he’s not there). But, for the sake of getting this over with, we’ll admit it was an upsetting turn of events for our heroine. Yet when you’re that good looking, therapy and meaningless sex would have been acceptable ways to overcome such workplace trauma. Instead, she low-tails it to the South Pole, where she befriends station doctor John Fury (Tom Skerritt, looking distressingly like Anthony Zerbe) and probably basks in the knowledge that she’s the hottest woman within six million square miles. In Antarctica, it seems, the weather is rarely conducive to airplanes coming and going, so the incoming transport will be the last for six months. Even worse, an approaching storm requires the complete evacuation of the station. But when a very dead body is found in the snow, Carrie must investigate. How the poor sod, a member of a research team studying meteorites, wound up frozen, twisted and dead has something to do with the movie’s CGI-laden prologue, the one that proves conclusively that if you engage in a raging gunfight on a plane in mid-flight you deserve to crash and die.

One of Whiteout ’s many failings is that, unlike Insomnia (it’s painful comparing Whiteout to Nolan’s superior, overlooked film, but the comparison has some value) it misses a chance to make a deeper thematic parallel between Carrie’s current investigation and her previous ordeal. As it plays, the Miami flashbacks, punctuated with slick transitions and colorized to a hot Caribbean glow, are more a pulpy explanation as to how she wound up in Antarctica than anything worth exploring. The only such connection comes with the arrival of Robert (Gabriel Macht), a young, United Nations something-or-other so handsome that we can only assume an affair is coming. Instead, Robert’s purpose is to help Carrie overcome trust issues when working with a partner. Otherwise, this is a pretty sorry script (credited to four writers) delivered by a rather poor cast, including Beckinsale, a cold fish who lets us into her pants faster than she lets us into her head. As for Sena, he gives us flash but too little energy, plot but too little story. Chase scenes in a small, isolated, indoor compound seem ridiculous and futile and the protracted, lame climax features three characters, almost totally obscured by their winter clothing, fighting in near-obscurity in a raging storm. It’s fair to say that Antarctica is a unique setting for a thriller (with Manitoba, Canada filling in nicely for the South Pole). But the central mystery is so uninteresting that even a unique location can’t, just by virtue of being unique, prop up such a routine thriller.