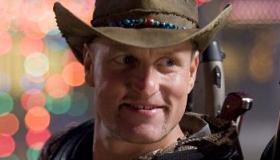 To a subgenre that includes Shaun of the Dead, Cemetery Man and Fido comes Zombieland, the latest horror comedy to try to score laughs from the living's battle to survive among the ravenous undead. Less about zombies than about four not quite socialized strangers bonding after the apocalypse, the laughs are not quite as robust as the movie's trailers suggest. Nevertheless it is very funny, reaching comic perfection when Bill Murray pops up to play himself in a truly inspired cameo. With its built-in appeal to both horror fans and comedy buffs, Zombieland should generate healthy box office throughout the Halloween season.

Skittish Columbus ( Adventureland 's Jesse Eisenberg) narrates the tale and limns a short, sad history of the United States transformed into the wreckage he calls Zombieland. Columbus stays alive by adhering to an ever expanding list of rules. He also thrives because he’s shy, withdrawn and used to being alone. That changes when he meets up with boisterous, aggressive Tallahassee (Woody Harrelson), and despite their wildly different demeanors they decide to team up, at least for a while. Sisters Wichita (Emma Stone) and Little Rock (Abigail Breslin) are heading for California and an amusement park rumored to be zombie free. A rocky first encounter between the siblings and Columbus and Tallahassee suggests a short acquaintance is in the cards, but circumstances conspire to set them on the road together to the Golden State.

Zombieland takes place long enough after the initial zombie outbreak that few people are still alive; it’s clear the real decay hasn’t yet set in. The eeriest element of the movie is not the undead that menace the survivors, nor the survivors who fight back with whatever weapons are at their disposal, but the empty buildings where lights still blaze and lines of abandoned cars park willy-nilly along the highways. There is much humor in Tallahassee's ongoing search for Twinkies, but the quest underlines the fact the world is more or less over except for these little pockets of zombie resistance. Screenwriters Rhett Reese and Paul Wernick maintain a careful balance between humor and horror in a witty script infused with affection for all things zombie. Not all of the jokes work, but first-time feature director Ruben Fleischer keeps the action moving at such a brisk pace that those that fall flat barely register before something truly funny (or truly horrifying) happens. Stone and Breslin are fine as the slippery sisters, but Zombieland belongs to its male leads, actors as disparate as the characters they play. It is a combination that works beautifully, the contrast between Eisenberg's diffidence and Harrelson's cockiness making for some pretty wonderful chemistry.

At 83 minutes, there is no fat on this Zombie. Fleischer keeps the momentum up, building laughs and suspense as the quartet moves inexorably toward California and a bang-up climax at the amusement park. But the real delight in the movie is not in its finish—though that is satisfying—but in the detours along the way: a search for a new car, a visit to a desert trading post, a tour of Hollywood Boulevard, a stopover at a Beverly Hills mansion and more. Putting it over the top is Murray's cameo, a short scene that alone warrants Zombieland a place in the horror comedy pantheon.