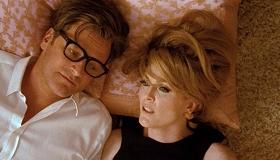 Fashion designer Tom Ford establishes himself as a filmmaker to celebrate from the very first sequence of his artfully constructed, heartfelt adaptation of Christopher Isherwood's 1964 novel A Single Man. The story of closeted literature professor George Falconer (Colin Firth), a middle-aged man in 1962 who faces a depression after the accidental death of his longtime lover Jim (Matthew Goode), A Single Man is a standout debut for Ford and a strong addition for The Weinstein Company which purchased the film during the Toronto International Film Festival. Featuring a subtle but heartbreaking performance from Colin Firth as Falconer and solid support from Julianne Moore as Falconer's longtime friend Charley, A Single Man is a breakout achievement for Ford and a beautiful human drama sure to appeal to arthouse moviegoers. Fans of Ford's fashion work will seek out the film, and strong word of mouth and award considerations for Firth, Moore and Ford will help the film crossover to mainstream audiences, much as Brokeback Mountain did four years ago.

After designing the suits for Daniel Craig's performance as James Bond in Quantum of Solace, Ford makes his directing debut with A Single Man. The film begins powerfully on a snow-covered Colorado highway, a dream image from Falconer's subconscious. Falconer's day comes full circle by the film's climactic finale, another dream sequence that may be too dreamlike for its own good, but still makes an emotional impact.

It comes as no surprise that Ford, a designer of the highest order, has made a film as detailed and stunning as A Single Man. Eduard Grau makes perfect use of the film's 1962 setting and Falconer's modern glass house in Laurel Canyon. In one scene, the camera rests on Falconer's face between the slats of wood on the house's exterior wall. In that single image one sees so much about Falconer, a man who celebrates his life and yet, as is appropriate for the time and place, must remain very private. The screenplay from Ford and David Scearce tweaks Isherwood's novel respectfully and makes Falconer one of the more interesting male characters in many movies.

Single Man may be a drama about the death of a loved one but the film is fresh, elegant and very much alive. With beautiful backdrops, a perfect use of period music and engaging characters, Single Man is movie melodrama in the best use of the phrase.

It helps that Colin Firth, who received a best actor award at Venice for the role, gives the most subtle and emotional performance of his career, eclipsing his acclaimed work in Pride and Prejudice. Firth’s Falcone is a man with strong beliefs who is slowly losing his zest for life due to emotional crisis. He's extremely likable and of course, brilliantly stylish; as such he’s even more tragic.

The Weinstein Company has an expected hit with A Single Man, a film that will likely exceed the box office of Far From Heaven and with awards nominations may match the phenomenon of Brokeback Mountain, another drama about tragic love.