close
Some dreams require imagination, others are just imaginary 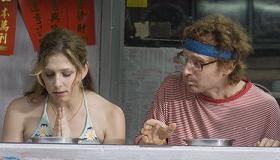 Renaissance filmmaker Ari Gold pulled out his pistol and fired one away in the dark. The upshot is Adventures of Power, a jocular offering splicing zany throwbacks with a storyline that veers off the conventional curb. A copper miner’s son is a hero-in-the-waits geek determined to rock—thought he lacks musical instruments. The wacky tale, complete with a cameo by a music legend, should witness herds raising their hypothetical lighters.

An arena rock-themed montage exposes Power’s (Ari Gold) internal universe to us. His imagination resides far away from his lever-pulling daze at a copper mine in Lode, New Mexico. Daydreaming while on-the-clock, Power is not worth a damn as a worker—vexing his father, Harlan (Michael McKean), a union boss. Jamming to Phil Collins and Rush anthems, Power munches cereal and bashes away to the beat with his imaginary drumsticks in perfect cadence. The music videos effectively string the cheese and offer flattering references to mainstays Footloose and Rocky. While Power’s flaunting his high-volume solos to the workers’ discontent, the union is going on strike to protest looming pay cuts hammered down by big boss Houston (Richard Fancy). Power can’t keep from getting canned after he jams to a number and reaps havoc.

Dejected and snubbed by everybody, including his dad who calls him names like “pussyfooter,” Power pedals his bicycle to Mexico for an air-drumming showdown. Down south, he finds his ilk: a batch of nomads, all playing virtuoso percussion despite not one claiming a physical single cymbal or tom. Law enforcement breaks-up the party at the watering hole right in the middle of Power’s standup rendition to Rush’s classic Tom Sawyer. But he’s able to win the approval of drumming maestro Carlos (Steven Williams). Rather than return home Power sets east to find his rhythm.

Powers proves his geography is a tad skew when he mistakes the brick city for the big city. Not a few seconds upon arrival Power gets the snot knocked out of him by a pack of two-bit thugs. He recuperates in the back of a Chinese takeout joint. Back on his feet, Power pays for his board by mopping floors between dance routines. The fast food husband and wife owners believe in Power’s potential. So too does deaf and god-fearing Annie (Shoshannah Stern) who lives above the noodle shop by night, proselytizing to passers-by during the day. Despite her disapproving mom, Annie and Power strike-up a romance. She can’t hear his music but she can feel it. And he can’t play anything but he himself is the instrument.

The playful plot with go-figure ending is bubbly, and the mechanics of the film are on-point for the most part. Filmmaker Ari Gold, who pulled a Clint Eastwood by doing everything in this film from composing the lyrics to flapping jacks for craft services, made a tightly constructed film. Most notable are the passé montages where Power’s is running in slow motion around the ghetto, his ghost-white legs blinding the eyes while his crotch-hugging shorts, headband and thick-framed glasses are glaring in other ways.

Power, as the nerdy hero with a scrawny build, tight cut grandpa shorts and invisible drumsticks creates a force and may one day find the same fame epitomized in comic books and big screen glory. His Peter Pan antics and novel drumbeat is a fresh arrival and warrants our hearts and minds.