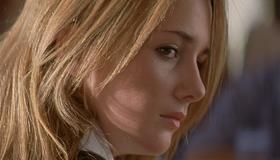 Alienated though he may be, it’s not as though Robert doesn’t try to connect. During a phone call to his mother he’s told he should go to the school counselor and request a prescription for mood levelers, “Please tell me you’re going to be okay, I have enough to worry about at work,” she drones. Neither his counselor (who’s good for little more than chummy ribbing and obtuse word-associations) nor his drug-dealer roommate are willing to introduce him to the two coolest gals in school because, well, he’s just not cool enough.

Robert’s only interest is video, viral or otherwise. He watches the stuff late into the night. He signs up for an after school video production class. It is at this stage, a good thirty-minutes into the film, that the plot actually takes hold. Those aforementioned popular girls, twins, interrupt Robert’s camera set up and die of a drug overdose right before his eyes. In a fuzzy video clip we see replayed again and again, Robert crouches beside the second sister in an apparent attempt at comfort just as the life rattles out of her. Crowds gather, teachers cry out for medical aid. Administrators bark at the students to return to their classes, but they remain rooted to the spot like so many sheep, transfixed by the gory tableau. But Robert emerges from the chaos a cipher; he’s not shocked, he’s nonplussed by it all, and we come to realize he’s not a pariah, but a by-product.

Not unlike JD Salinger two generations before him, Director Antonio Campos has drawn a great deal of attention for his raw and insightful short films that speak to the social and spiritual disenfranchisement of America’s youth. Producing films since age 13, Campos is the recipient of the Presidential Scholar Award. Afterschool, Campos’ latest effort, debuted in 2008 as part of Cannes Un Certain Regard series eventually earning 2 Gotham, an Independent Spirit and Nashville Film Festival Special Jury Prize Awards.

Through a documentary-style narrative that smacks of Cinema Vérité, Campos builds his story in awkwardly framed shots with subjects cut in half or omitted altogether, dialogue drifts in from the outside of frame, lengthy pauses in action are anything but pregnant. But it is precisely this sense of the vérité that makes the film difficult to watch. Afterschool ’s pacing is slow to the point of stagnation. While Campos creates an interesting sense of dramatic distance, the audience finds little opportunity to engage with the story or empathize with its characters. Perhaps this is the intent of Afterschool, to create such a distancing effect the viewer is forced to observe, perhaps even critique these young people’s experience. If this is the case, Afterschool is one long period of detention.