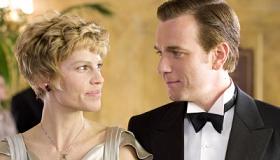 The woman the earth couldn't hold proves a slippery subject for audiences curious to know the real Amelia Earhart. Mira Nair's good-looking biography doesn't hold Earhart up as a saint: she was stubborn and self-interested as hell. But ultimately, we whiz by her, faults and all, so fast we remember only a blur defined by a knockout wardrobe and broad grin. Modest houses who trickle in to rate Amelia 's Oscar chances will find there's little to object to—or love about—this drama besides its easily achieved femmepowerment message; it's far less ambitious than its subject—and less memorable.

Hilary Swank, she of the sharp shoulders and golden Academy touch, does what she can to invest Amelia Earhart with life. Earhart is half of a good character: she's bold, individual and iconic. A romantic iconoclast, she wrote her manager and husband-to-be George Putnam (Richard Gere) on the eve of their wedding, "I shall not hold you to any medieval code of faithfulness to me, nor shall I consider myself bound to you similarly...I cannot guarantee to endure at all the confinements of even an attractive cage." Earhart kept her word when she plunged into an affair with Gene Vidal (Ewan McGregor) and continued to invite him over for dinner. Independence was her key trait. It made people then and now want to tether themselves to her strength; in turn, she defended her right to be aloof.

Putnam manufactured her into one of the first media celebrities, and here we see her reluctantly endorsing cigarettes and luggage. But the tabloid scalpel didn't yet exist that would carve depth in the living icon. Nair can't give us more than a handsome press release for a woman who didn't like explaining her achievements beyond, “I want to do it because I want to do it.” And her early death protected her from collecting a lifetime of mistakes or the standard shabby decline into booze. As glossy flicks go, I'd happily buy my nieces tickets. Earhart's life and love philosophy might be bracing, but at least she refused to be defined by her liaisons, as did Coco Chanel in her biopic last month.

Swank has fun in the role—I haven't seen her smile this much in years—but she isn't given much complicated to do besides frustrate her friends when she digs in her heels. Gere, too, could handle giving Putnam more dimensions as he only gets to wade ankle deep in jealousy, grief and hucksterism. Towards the end, we're meant to feel the financial squeeze that underlined the couple's crazy around-the-world stunt, but the pressures of the outside world never register. How could they when she's got all those slick outfits—her buckles, scarves and goggles make her steam punk's pin-up girl. Christopher Eccleston has a small but powerful role as Fred Noonan, the navigator that vanished with Earhart on her last flight. One investigator speculates they survived long enough to settle in on Nikumaroro Island in the Pacific, where bones of a 5'7" Caucasian female were unearthed in 1940. But ultimately, this film concedes that for all Earhart's interviews, she lived the way she died: unknowably.