close
Dark and compelling but also energetic and fun 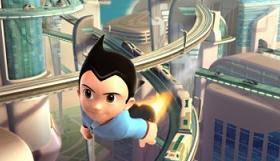 In Japan, Astro Boy is as large an iconic figure as Mickey Mouse is in the United States. One can find images of the Americanized, cherubic, 10 year old boy, shirtless in black trunks along side Godzilla and oddly Japanese likenesses of pop-star Michael Jackson. In the late ’60s Astro Boy immigrated to the United States in re-voiced versions of the Japanese cartoons that found their way on to the newly expanded UHF airwaves. This is when my generation became familiar with the jet-powered little boy with rocket for feet and the strength of 100 men. Of course Astro Boy isn’t a boy at all, he’s robot constructed in the likeness of a particular boy, Toby Tenma, that was built to console his grieving father, the brilliant Dr. Tenma (Nicolas Cage), who lost Toby in a tragic if not predictable accident. For this Americanized film, Freddy Highmore (Charlie and the Chocolate Factory) provides the voice of Toby (the actual boy) and Astro Boy, the robot who does not immediately know that he’s a robot. Oddly, the likely audience for Astro Boy is the over-40 crowd, who may be inclined to take their younger kids to see a piece of their childhood. The kids will have no idea who Astro Boy is, and may in fact be freaked-out by the circumstances that lead to the creation of the character, who after all is created after the fairly brutal death of the actual boy. This could dampen box office.

The narrative for the feature is built from the ground up (except for Toby’s death which is part of the original story), and definitively bent toward an American (or perhaps international) audience. Some earthlings have literally taken off. With advanced technology they’ve lifted the chunk of the planet dubbed Metro City high into the sky above the wasted earth, leaving behind only remnants of this world’s past, which includes garbage and those people who did not want to live in the homogeneous city in the sky. Meanwhile, on Metro City, the humans are still wasteful, lazy and greedy. Robots do everything and when they’re worn-out Metro residents dump them back on earth, creating giant piles of semi-functional robots of every ilk. But like all places humanity has inhabited throughout history, the paradise island in the sky is a political and militaristic place. There’s an election coming up and the incumbent president needs a reason for the people to vote for him and a war with the “earthers” will do. He commissions his top scientists, including Dr. Tenma and his mentor Dr. Elefun (the voice of Bill Nighy) to produce a robot powered by the newly discovered “red energy” to attack earth and its remaining inhabitants. It’s during the testing of the red energy powered robot that the human Astro Boy is lost.

If all of this sounds a bit heavy, even dark and scary, indeed some of it is. But it’s also very funny, action packed and pithy. The youngsters at the screening I attended didn’t seem to be put off in the slightest by the darker elements, indeed they appeared to be moved. Then again, Astro Boy is ultimately a movie about a little kid with rockets for feet and the strength of 100 men, who is smart and capable and just wants to be with his dad—and save the world. What little kid wouldn’t want to do all of that, even if they did have to be a robot to accomplish it?