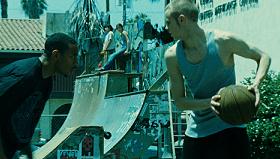 Ball Don’t Lie tells of a modern-day Oliver Twist with sick basketball skills. While orphan Stanley “Sticky” Reichard has ample game, Brin Hill’s adaptation of Matt de la Peña’s novel has only enough to be entertaining. Set in Venice, California, it’s a hip-hop ode to basketball and the sanctuary sports can provide. The squad of recognizable actors supporting rookie performer and real-life hoopster Grayson Boucher will raise the movie’s profile somewhat. A portion of any profits will be donated to the National Casa Foster Care System. Let’s hope the organization has other benefactors.

Not only does pint-sized Sticky prove adept on the hardwood, he’s a reminder that white kids have to jump through the same hoops as minorities when it comes to familial hardship and the social safety net. Taking place over the course of one eventful day, the movie flashes back through what Sticky has endured during his seventeen years and why he’s developed OCD-related tics. The gym provides a haven where his anxiety and repetitive behaviors are manageable, but it’s not without its own stresses. He’s up early and goes to the Lincoln Recreation Center for a very serious pick-up game with a bunch of bigger, older gym rats. A lightening fast guard, the shy high-school junior has his athletic ability and character tested. He’s trying to get the money to buy his girlfriend (Kim Hidalgo) a necklace for her birthday.

In bringing de la Peña’s young-adult novel to the screen, director Hill recruits enough recognizable actors for three pick-up games. Ludacris and James Pickens, Jr. ( Grey’s Anatomy ) play social workers who try to find Sticky a good home and, not incidentally, introduce him to basketball. His patently unfit single mom (Emilie de Ravin) was a prostitute who shacked up with her pimp—a nasty string bean played by Nick Cannon who, in one of the movie’s more luridly sensational scenes, uses Sticky as an ashtray. (Cannon is so convincing his real life wife Mariah Carey may want to rethink having kids.) His mother’s traumatic demise, staged during the film’s climactic quarter, led to Sticky being taken in by a series of mostly well-meaning foster parents limned by Roseanna Arquette, Melissa Leo and Desperate Housewives ’ Ricardo Chavira, among others. The rec center where he hangs out is run by a stuttering guy with thick glasses (Harold Perrineau) who’s constantly chewing out the rowdy habitués portrayed by the likes of Mykelti Williamson, Steve Harris (scary) and Cress Williams.

In his acting debut, Boucher, a street basketball prodigy known as “The Professor,” is the key to whatever authenticity this the coming of age story possesses. He makes the bleacher full of melodramatic plot turns seem less soapy—as does the Venice setting, since we’re not as accustomed to seeing such hardship by the sea or under a sun shining so brightly. An impassioned speech by one of Sticky’s African-American b-ball acquaintances detailing his philosophy of haves-versus-have-nots and race relations injects another dimension that helps move Ball Don’t Lie some way beyond sports and social service clichés. Hill appears to try everything he can think of to make the flashback structure feel less cumbersome and to vary the visual texture. His proficiency at short films and commercials is evident in his camera (which is constantly panning and playing peek-a-boo), as well as his liberal use of color and exposure variations to depict Sticky’s nightmarish past. Sticky’s stabs at rapping are mirrored not only by the movie’s stanza-like structure but also by the energetic hip-hop soundtrack.

When the buzzer finally sounds, Ball Don’t Lie has what you might call an excess of street cred. As the title suggests, a lack of athletic ability is difficult to conceal on the basketball court. On screen, talented filmmakers can sometimes try too hard to convey the truth.