close
Karate-chopping stuperstud sticks it to the Man, and b-movie action fixture Michael Jai White is at last a breakout star. You dig? 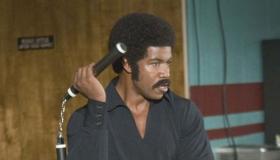 Almost certainly the smartest buy at Sundance 2009 will turn out to be Sony’s purchase of the note-perfect and spirited ’70s blaxploitation parody Black Dynamite, snapped up for a reported (and very low) $2 million. Sony is already talking franchise, and you can see why. Not only will there be a lucrative DVD cult market at a minimum for this frequently belly-laugh hilarious depiction of playas and mack-daddies up against “The Man,” but in co-screenwriter and star Michael Jai White (whose long career as an actor, fight choreographer and b-movie action star stretches all the way back to Troma’s The Toxic Avenger II in 1989), Sony has set up a relationship with a blossoming and multi-talented breakout star. A wider general audience for this movie, while not assured, is a very strong possibility.

In the grand manner of Dolemite, Sweetback, Superfly and Shaft, Black Dynamite (White, wearing a patently false mustache borrowed from Richard Roundtree by way of Melvin Van Peebles) is an indestructible, karate chopping super-stud on a revenge trip after his baby brother Jimmy gets wiped out by shady drug-lords while working as an undercover agent for the CIA. Dynamite (whose three note theme blares “Dyn-o-mite!” every time he walks through a door) and a ragtag team of cohorts with names like Bullhorn (co-writer Byron Minns) and Cream Corn (Tommy Davidson, channeling the Jimmy Walker of Good Times and Antonio Fargas’ Huggy Bear) battle their way through a maze of white villainy in a blizzard of gunfire, hand-to-hand combat, bad car stunt-work and black power salutes. But it’s all a lot bigger than a drug-deal gone wrong, as Dynamite uncovers an international conspiracy much bigger than the local mob. Fortunately for Dynamite, whether he’s “takin’ back the streets” or battling Asian super villains in their island fortresses like a black Bruce Lee, his enemies attack him one at a time and are no match for Dynamite’s way with a gun or his absolute mastery of what he calls “the Kung Fu.”

Reminiscent of the web-video smash The Italian Spiderman in its satire of pre-feminist low-budget macho action flicks, Black Dynamite would be a hilarious movie even if it weren’t so well made and thorough. But White and his collaborators, especially director Scott Sanders, must have watched and re-watched every blaxploitation movie ever made a hundred times to get the style, tone and production limitations of those old camp classics so unerringly right. As a bonus, White is also a pretty amazing fight choreographer and martial artist, and as Dynamite kicks and chops his way through a b-movie dictionary of cheesy star-filters, Jheri-Curl hairdos, ersatz Curtis Mayfield protest funk, continuity errors and microphones that make their way into the shot, White is also giving a marvelous and acrobatic display of the gifts of a born action star.

For those who want a bit more intellectual content in their trash entertainments, there’s also a sly political Rorschach test buried beneath the cheese ball sound effects and bad music library funk, though it’s hard to say whether Sanders, Minns and White are attacking the abuses of the ’70s-era white power structure or the black conspiracy theories that sprung up as a reaction to it. Since nothing is sacred to a movie featuring a scene of nine year old orphan junkies begging the hero for a fix, it’s probably a bit of both.

There will be some who find Black Dynamite a one-joke movie (because it kind of is) and the film does lose steam before an ending that’s more hilarious conceptually than it is in execution (although any highbrow types who accidentally blunder their way into a screening may never be able to watch Frost/Nixon the same way again). But if you’re one of those who respond to Black Dynamite as the spiritual kin not just of the films it so lovingly mocks but of such hilarities as Airplane! and the Police Squad franchise, you’ll feel more like the mack in the ad campaign for Anaconda, Black Dynamite ’s “only malt liquor approved by Uncle Sam.” This movie will make you say “Oooooooooo!”