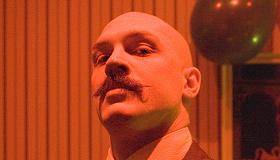 Bronson is a stridently static film with an amazingly fluid performance at its center. Directed by Danish filmmaker Nicolas Winding Refn (best known for the Pusher trilogy), this true-life story chronicles Michael Peterson (aka “Charles Bronson”), an inmate in the British penal system whom the Times of London has referred to as “Britain’s most dangerous prisoner” for his repeated attacks on guards, other inmates and anyone else unlucky enough to get near him during his 35 years behind bars. There won’t be an audience for this film, or at least there won’t be the right one—it’s far too bloody for the arthouse set and way too brainy for Transporter fans. But this is a breakout film for one of Britain’s most gifted and under-utilized actors, and if it’s to be remembered for anything, it will be as the Romper Stomper to a next generation’s Russell Crowe.

Refn sees Bronson’s commitment to violence as either impenetrable, aesthetic or congenital, depending on your point of view. Despite mounting each scene with the visual precision of Kubrick’s A Clockwork Orange (a clear influence on Refn’s thinking about this material), neither the director nor screenwriter Brock Norman Brock make any attempt to explain the roots of Bronson’s pathology, except where they suggest it may be a sort of perverse creative outlet. Violence is instead mostly a given with Bronson, like his shaved head and incongruously cheery walrus mustache. Surrealist directorial touches, such as images of Bronson in whiteface presenting his saga to a faceless audience like some psychotic vaudevillian, are used to distance rather than to draw close to what another filmmaker might have seen as Bronson’s seething inner world.

What saves this movie from becoming an off-putting if ravishing exercise in amorality and Brechtian alienation is the insanely committed and vibrant acting of Tom Hardy, the rising British talent still unfortunately remembered in America mostly for playing Praetor Shinzon, Captain Picard’s evil clone in the franchise-killer Star Trek: Nemesis. Hardy’s Bronson is as dexterous a dastard as the screen has seen in years—a mesmerizing and even whimsical creation attuned to such an alternate wavelength he seems almost impatient with the monochromatic dullards life keeps presenting him with as objects for his chipper wrath. If Refn seems uninterested in explaining his protagonist, Hardy more than compensates by portraying Bronson as the vivid end result of a fully worked out, if largely impenetrable, interior life.

Despite the dry precision of the filmcraft that surrounds him, there’s something so volatile and alive in Hardy’s glinting eyes that he lays waste to whatever equation of aesthetic trigonometry Refn thought he was working out. Bronson is a film where the actor, just like the man he’s playing, uses ferocious and unexpected means to force his disturbing humanity up against the cage someone else has built to confine him. On that level alone, this film is a must see.