close
A Twilight for Tween Boys? 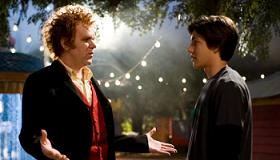 Like Twilight, Cirque du Freak: The Vampire’s Assistant hopes to capitalize on vampire chic, but this tale’s turn to the dark side is as anemic as a victim of the film’s fanged teen. Based on the first three of English writer Darren Shan's Cirque du Freak tween novels, this horror comedy is neither very scary nor particularly funny. It also plays less like a self-contained story than one long set-up for a sequel, which is awfully presumptuous as box office returns may be too mild for such a follow-up. The books have a following and so do the stars, and the movie is opening just in time for Halloween thus auguring a decent opening weekend, but Universal may find scaring up business quite a chore once word of mouth gets around.

Best friends Darren Shan (Chris Massoglia) and Steve (Josh Hutcherson) could not be more different from one another. Darren is a good kid (at least when grownups are around) with a passion for spiders. Steve is troubled and so obsessed with vampires that he would like to become one. Steve is understandably bitter when Larten Crepsley (John C. Reilly), the vampire magician they meet at the Cirque du Freak, refuses to turn him but transforms Darren into a "half vampire" ("half" meaning he can still thrive in sunlight). Darren only agrees to the metamorphosis to save Steve's life after Crepsley's spider, Octa, bites him, but in his pique Steve takes up with the diabolical Mr. Tiny (Michael Cerveris), a supernatural troublemaker who is trying to start a war by forcing an end to a 100-year truce between vampires like Crepsley—who drink human blood but are careful not to harm their victims—and their stone-cold killer counterparts, The Vampineze.

This is a special-effects movie in which the effects are not very special. Neither are the freaks—among them are a bearded lady psychic (Salma Hayek), a snake boy (Patrick Fugit) and a woman who can instantaneously grow back missing limbs (Jane Krakowski). Further sinking the film are the two kids, a combination of characters that are simply unpleasant—Darren is unctuous and Steve is bratty—played by young actors who are at sea trying to connect with their roles. Hutcherson, a likeable performer who starred in Journey to the Center of the Earth and Bridge to Terabithia, is particularly ill suited to his part. He may have a villain in him, but not one this underwritten.

That leaves the grownups to pick up the slack—when the week script lets them. Most of them, including Hayek, Fugit and Krakowski have little to do other than decorate the frame. Poor Cerveris, a Broadway star and perennial Tony nominee (and winner for Assassins ) is stuck playing a Snidely Whiplash character in a prosthetic fat suit. Only two actors truly get the opportunity to shine and they are the sole reasons to see this movie. Reilly brings genuine humor and soul to the part of well-meaning vampire Crepsley. Decked out in a painted on mustache, Willem Dafoe shines as Crepsley's pal, Gavner Purl. A buddy movie revolving around those two characters would have been infinitely more satisfying than this pallid production.

The talents behind The Vampire's Assistant make the film’s mediocrity shocking. Directed by Paul Weitz ( American Pie, In Good Company ) and co-written by Weitz, an Oscar nominee for About a Boy and Brian Hegleland, an Oscar winner for L.A. Confidential and nominee for Mystic River, these filmmaker’s involvement promises so much more than the film delivers. With these writers one expects a compelling story and full-bodied characters, at the least. Yet, The Vampire's Assistant has neither. Perhaps Weitz and Hegleland faced their own encounter with a vampire that sucked the life right out of their screenplay.