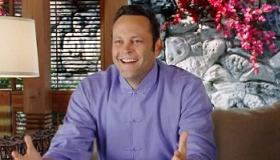 Some movies, like some marriages, are beyond saving. At least Vince Vaughn, Jon Favreau and their fellow cast and crewmates were able to spend time on a gorgeous tropical island while making this mirthless, half-hearted relationship comedy. Let’s not begrudge them their location fun, but for the rest of us Couples Retreat is like Monday morning inside a cubicle sweating under the fluorescents. A lack of copy-room buzz, combined with demographic appeal well north of ideal (the couple limned by Favreau and Kristin Davis have an 18 year old daughter headed off to Stanford), should ensure steep fall-off after a weekend with no other wide releases.

Working from a flat script by Favreau, Vaughn and Dana Fox, novice helmer and Vaughn crony Peter Billingsley provides direction that can be charitably described as lackadaisical. Three Chicago-area friends allow themselves to be coerced by a fourth into traveling to Eden Resort and submitting themselves to a regimen designed by a “Couples Whisperer” named Marcel (Jean Reno). Malin Akerman plays Vaughn’s wife and the mother of their two young boys—who are only in the film to provide us with a potty gag. Favreau and Davis are high-school sweethearts counting the minutes until their girl flies the coop so they can split. And Faizon Love portrays a recently divorced chum who brings along his girlfriend of two weeks (Kali Hawk); she’s twenty and calls him “Daddy.” Jason Bateman and Kristen Bell limn the hyper-organized and childless marrieds who force their pals to join them so they can figure out whether or not they should call it quits.

Instead of fleeing snowy suburbia for a carefree vacation featuring a bit of quasi-therapy and lots of sex, the couples are subjected to a bunch of early-morning, New Age exercises by the fatuous staff. In arguably the most outrageous and predictable sequence, a buff Yoga instructor (Carlos Ponce channeling Hank Azaria in Along Came Polly ) rubs his privates over each member of the party while demonstrating Tantric positions. Toward the end, Marcel assigns each couple an animal spirit. Trying to figure out in advance which pair he will deem a rabbit, a honeybee, a wolf and an ass would be more enjoyable than actually watching the movie. Amazingly, it loses energy when the couples finally flee their side of the resort, Eden West (brochure slogan: “Stay Together”), and make it to the neighboring Shangri-la devoted to singles, Eden East (brochure slogan: “Come Together”).

The concept isn’t bad and all the principals have amused in past films, but jokes are bypassed in favor of canned marital advice. The film amounts to a series of wasted opportunities and undeveloped scenes. A few quips land yet nothing is sustained. Caught in the no-man’s land between clever verbal comedy and raunchy sex humor, Couples Retreat was rated PG-13 on appeal. Even allowing for the trimming that had to be done to avoid an R, it’s hard to imagine how the material would have generated more laughs.

There’s one exchange between Favreau and Vaughn—semantic quibbling about what constitutes cheating on one’s spouse—that’s reminiscent of their former comic glory. The fact is they’re starting to get up there in years by Hollywood standards and references to Mr. Belvedere, Richard Simmons and even (one hates to admit) Bruce Lee suggest their shtick is dated. Fuddy-duddy is too strong; you might just say younger comic actors and filmmakers have lapped them. And while Favreau has branched out professionally (see Iron Man ), Vaughn is in a rut and would be well advised to work for hire. At least next time, instead of a couple’s therapist he should try a script doctor.