close
What did anyone ever do to deserve this? 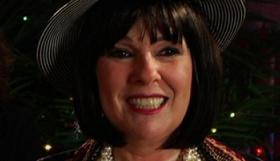 Almost immediately, there are warning signs that Creating Karma will not go well. A bit player with some throwaway lines in one of the first shots is framed so his gift-shop joke T-shirt is prominently displayed. A couple of minutes later, a major joke actually trots out funny-nose glasses, and shortly thereafter a scene plays out in fast-forward for comedic effect. And these are just the jokes ; this is a film that fails on several technical levels as well. Yet, the most depressing thing about Creating Karma isn't just that it's one of the worst movies I've ever seen, but that it seems to think it's doing us a favor. The film puts emphasis on the fact that co-star/writer/director Jill Wisoff and co-star/writer Carol Lee Sirugo wrote the movie themselves to create roles for funny women (something both men and women can no doubt support), but the final product is so bad it's more likely to cause its intended audience to swear off comedy than to demand more.

The vague, half-existent plot focuses on uptight, upper-class Karma (Sirugo), aka Ivana, who takes considerable pride in her affluent lifestyle and dignified upbringing. At her father's funeral, however, she encounters her estranged sister Callie (Wisoff), who reveals that Karma's mother was actually a swinging hippie in the 70's who went by the nickname "Lollipop Fields." Learning this puts a damper on her self-image of refinement and shortly thereafter Ivana gets fired from her fashion mag job and evicted from her apartment. With nowhere else to go, she tracks down her late father's band mate Rajah (Roland Sands), seeking financial help. Instead, he advises her to try to bond with her crazy sibling.

Even ignoring the problems in the film's execution, Karma's journey is just as riddled with issues on the page. Karma's vices are shopping and coffee, whereas Callie's are promiscuity and a lack of boundaries. No one of the sisters appears to be better off than the other, and it's ridiculous for the movie to imply that rich CEOs can't be spiritual and that bohemians can't be shallow. I'm also not sure when tea became a key solution to all of life's problems.

Then again, those shallow stereotypes are nothing compared to the wild mixed-message the movie's side characters send to the viewer. On her first day searching for a new job Karma goes to a coffee bar in Callie's neighborhood, and instead of it proving to be, say, surprisingly appealing (since one expects Karma will eventually come to like it), barista Vincent (Rahad Coulter-Stevenson) is insulting when she tries to order a cappuccino, a patron steals her wallet and the guy on the all-day open-mic stage takes his shirt off and recites an awkward, sexual poem. It doesn't paint a positive picture of the life Callie wants Karma to embrace, but then again, the upscale life isn't any nicer: Karma's posh apartment is taken by a con man, her oh-so-cleverly-named ex-manager Prighorn (Joe Grifasi) is hard at work soliciting sexual favors from his shallow staff and the girl behind the counter at the classy, Starbucks-look-alike is cold and unsympathetic. Predictably, the atmosphere of the coffee bar arbitrarily changes when Karma begins to embrace it, which is a cheap trick.

Though the production values are dire, the film’s most grievous error is that it’s only about karma in the most peripheral sense of the word. Aside from some coincidental touches, there's no real sense that cause-and-effect turns Karma's life upside down, nor that it helps her to put it back together.

Believe it or not, it sucks to be so cruel to a movie with good intentions, but Creating Karma is a film that thinks lines like "I'm like a fine wine, I take my time" and "Ivana? I wanna!" are comically sound enough to inflict upon innocent, unsuspecting audiences, a film that delivers all performances at a painful pitch that borders on hysteria, a film where any intended philosophy or deeper meaning is a total sham. When push comes to shove, even an audience desperately starved for female-centric comedy that also thinks the pun in the title is the funniest thing they've ever heard (get it? Her name's Karma and she goes on a journey of self-discovery!) should avoid this depressingly inept mess.