close
A Hindi Four Rooms with even less gusto 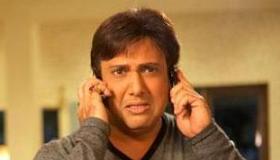 No bicarbonate soda is going to avert the gag reflex when watching Do Knot Disturb, a Bollywood flick that’s just not going to make it. Instead of casting the picture with two former Miss Universes, the filmmakers would have done well to punch-up a script and attend to the chintzy musical composition. Instead, only a couple of desperately drawn-out gags fill the minutes. Horndog Raj (Govinda) has married into wealth only to spend his days and nights lusting after a trophy on-the-side girlfriend he’ll do anything to keep. Trouble is he’s a moron and incapable of continuing the charade, despite bankrolling a scheme that blows up in everybody’s faces. Some audiences may come to watch the eye candy bounce around in brightly colored getups but the context is more cheap music video thrill than substantive cinema.

It’s curious what Raj (Govinda) did before he wed Kiran (Sushmita Sen) and became the kingpin of her Delhi company. Pimp or smut peddler come to mind. Raj’s roaming eye piques his wife’s suspicions. She hires a private detective to look into the matter. Sure enough the bloke is chasing a younger skirt named Dolly. In Porky Pig fashion, the hustler-in-CEO’s-clothing blabs about Dolly—saying her name again and again as if he’s in some orgasmic trance.

The two are caught on camera, but the quick-thinking bozo tells all that a third party, visible in the picture, is her real boyfriend. Thus begins the search to find the guy in the photo and attempt to create the biggest put on since Milli Vanilli took stage.

There’s a slight buildup where all the parties intersect at The Majestic Hotel and an intricate music video results. The entire work is trying to play off of two gags and fill the rest up with music videos—most of them thin and done-up with tacky tunes that clearly need many more takes in the recording studio.

Suffering through this one is hard work. I suspect male populations near and far will skip a night at the go-go dance joint and get their rocks off at the cinema instead. But as for the poor dates that they’ll drag along, this one is fit with flat notes and mediocre bits sold off as top shelf. Do Knot Disturb ? Do Knot Bother!