Eulogy for a Vampire 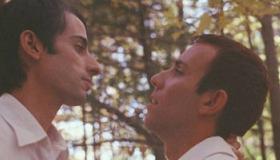 Exaggerated performances from an unknown cast, shoestring production values and a comical blend of Catholicism and vampirism set in a rural abbey may prevent a successful platform release for director Patrick McGuinn's independent horror Eulogy for a Vampire. However, these same camp elements also make McGuinn's gay vampire tale a worthy candidate for cult status and a strong performer on the midnight movie circuit. McGuinn and screenwriter André Salas may not have intended to make a comedy. However, Eulogy for a Vampire, from Willing Suspension Films, with its lustful monks, laugh-out-loud dialogue and bare-budget makeup effects is a hilarious horror comedy and a guilty pleasure for select gay audiences willing to laugh at the film's heavy-handed stereotypes.

Twenty-five years after a crime of passion occurred between two young monks, a handsome stranger, Sebastian (Angelo Tursi), turns up sleeping on the abbey grounds like a male variation on Snow White. The young monks in residence all fall for Sebastian, except for Abbot Anthony (Wilson Hand) who senses he knows this young man from before. Soon, lustful dreams, mutilated animals and a strange sickness strike the monks. The mysterious happenings revolve around Sebastian and a peculiar crate locked in the abbey basement; a crate related to a crime from long-ago.

Eulogy for a Vampire 's best laughs revolve around Father Lars (David McWeeney), the monk in charge of dishing out punishment via his cat o' nine tails. He waits for Sebastian to leave his room and hungrily sniffs the young man's cotton briefs over and over again.

All the monks, except for the guilt-ridden abbot, lust for Sebastian. As the body count rises at the abbey, one of the young monks, Rafael (Damacio Ruiz), sums up the situation with a hilarious line of dialogue: "I didn't know monks had boyfriends or smoked!"

Traditional horror fans will find little to like about the film's poor gore effects and infrequent scares. Gay audiences who generally seek out serious dramas with political themes may take issue with the self-satirical storytelling throughout. However, for select fans of campy gay comedies, Eulogy for a Vampire turns out to be a yell-at-the-screen experience no different from Plan 9 From Outer Space or Mystery Science Theater 3000. It's entertaining as a cult film if you refuse to take anything about it seriously.