close
For a family treat, spend some time with a chicken thief 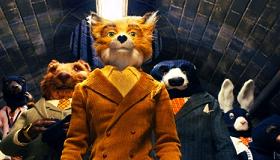 A witty script, brilliantly animated with stop motion techniques and wonderfully voiced by a cast led by George Clooney and Meryl Streep make quirky director Wes Anderson’s first foray into ‘toons a major winner and a total delight. Adapted from Roald Dahl’s best selling children’s book about a wily fox whose family life is threatened when he re-enters his “criminal” past, Fantastic Mr. Fox is indeed fantastic in every way. Returns from this Fox for 20th Century Fox should be sweet with an endless afterlife on DVD. Picture has its World Premiere at the London Film Festival October 14 and opens AFI Fest October 30 before NY and LA limited release on Nov 13th and a wide run by Thanksgiving.

First published in 1970, Dahl’s book has been a children’s staple for nearly 40 years. It’s actually surprising it hasn’t been adapted to film sooner. The story is simple: Mr. And Mrs. Fox (Clooney and Streep) live an idyllically normal underground existence with their comic book-obsessed son Ash (Jason Schwartzman) and his meditative cousin Kristofferson (Eric Anderson). Their peace is soon turned upside down when Mr. Fox gets itchy for something more and returns to his ways as a notorious chicken thief, enlisting nephew Kristofferson and expressionless Opossum buddie Kylie (Wally Wolodarsky) as his partners in a daring new round of raids that put them on a course of destruction with the farmers who have Mr. Fox at the top of their most wanted list. As the whole animal community is endangered by this action he must use all of his wits to save his family and friends from certain doom.

Eschewing fancy CGI and currently in vogue 3D effects, Anderson makes an innocent and appealing stop motion film; it’s stunning to behold in its animated simplicity and was reportedly shot in camera rather than computerized later. The superlative results of the painstaking process are all there to behold on screen in this brightly colored adventure kids of all ages and their parents are going to love. Although comparisons will likely be made to the year’s other stop motion success, Henry Selick’s 3D Coraline, novice animation director Anderson creates his own beguiling world and does Dahl’s own vision justice in the process. Chief among the film’s attributes is Anderson and Noah Baumbach’s superb and absolutely hilarious script. They have taken some liberties with the original story and tightened it up but the spirit is still there.

Voice casting in this case has turned out to be crucial with Clooney absolutely wonderful as the crafty Mr. Fox. Streep is not given as much to do but as you might expect she does it just fine. Bill Murray has some funny moments as the lawyer, Badger, while Schwartzman is ideal as the nerdy Ash. Anderson’s brother Eric, an illustrator and author in his own right, is swell as the calm Kristofferson. Willem DaFoe has some terrific moments as Rat, and Michael Gambon, Wolodarsky and Anderson regular Owen Wilson nicely round out the cast.

In a banner year for animated movies, Fantastic Mr. Fox is easily one of the best and should provide families and theatre owners a bountiful holiday treat.