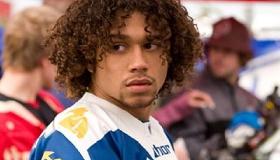 Motocross is a high-risk sport where riders vault their bikes over muddy hills in death race (or, more often, broken arms race) to the finish line. Yet while teen heartthrob Corbin Bleu ( High School Musical ) blasts his bike high and fast, this solid, likable teen drama stays grounded, and is all the better for it. The combo of gasoline and romance could draw in teenage boys and girls—or, perilously sideline both—but at worst, Free Style will putter along on good word of mouth.

Bleu plays Cale Bryant, an amateur motocross racer who vows to turn pro. Of course, to everyone else this is an (exhaust) pipe dream—something the script cops to, frankly. But to Cale, even the conventional life course seems impossible. College isn't in the cards and he's already working two jobs to support his mom (Penelope Ann Miller), a diner waitress, and younger sister Bailey (Madison Pettis, cute as the dickens). Making the national pro team seems as likely as anything else, a last ditch hope Cale's girl Crystal (Tegan Moss) and best friend Justin (Jesse Moss) can't entirely understand.

Jeffrey Nicholson and Joshua Leibner's script doesn't demonize Cale's friends for expecting him to fail, and it doesn't congratulate him for not readying a back-up plan. It's the Rocky of the X-Games generation—Cale might claim that failure isn't an option, but he and we and director William Dear all know that's just a slogan. What matters is hard work, and for every scene of Bleu tearing up the track on his bike, Dear has one of Bleu delivering pizza or stacking up VCRs at a big box electronics store in order to scrape together the cash for his next entrance fee. While Cale isn't a flashy enough role to be a star-maker for Bleu, he's solid enough to make me want to see what he'll do after he graduates from Disney.

Free Style 's working class pulse gives it a credibility most teen flicks lost somewhere in the '90s when the wrong-side-of-the-tracks Reagonomics of Pretty in Pink gave way to the McMansion house party hijinks of American Pie. There's plenty of drama and a closing nail-biter of a race. The major villain, a rich motocross rival (Matt Bellefluer) who steals Cale's girlfriend, is also saddled with a domineering father who pushes his son to win by any means necessary. And when Cale's new crush (Sandra Echeverría) comes with a father (Gustavo Febres) who wants better for his daughter than a motocross dreamer, we're allowed to empathize with a self-made man who worked hard to go from dishwasher to restaurateur. Add that to the confident but quietly played casting stroke of having the very blonde Miller play the mom of two mixed-race kids and you have a film Barack Obama would approve of screening for Sasha and Malia—there's even a jab at private health insurers.