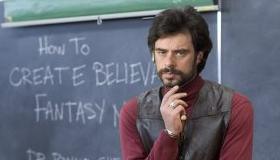 Its quirkiness preceding and very nearly swallowing it whole, Gentlemen Broncos is less warped than it thinks it is yet still provides enough bizarre, painstakingly designed schlock to tickle the willing. Raising the question whether B Sci-fi flicks are immune to parody, the folks behind Napoleon Dynamite and Nacho Libre place a budding fantasy writer in a small Utah town and let kitschy wackiness ensue. As Gentlemen Broncos expands, word of mouth amongst freaks and geeks of a certain age will have a mixed effect on receipts (because they’re the ones being affectionately roasted) but will also provide valued critical attention to the film’s execution.

The willingness of wonks between, say, 18 and 40 to drop their graphic novels, undock from multiple consoles and leave the house is going to be tested. Gentlemen Broncos has a narrower demographic appeal than Jared and Jerusha Hess’s Napoleon Dynamite, which transcended age and genre with its unforced, organic sense of humor. And it isn’t built around the antics of one personality as in Nacho Libre. Mike White, their collaborator on that one-joke Jack Black vehicle, has a significant presence on both sides of the camera here, and the married writing team has recruited fresh acting talent in Flight of the Conchords star Jemaine Clement. Sam Rockwell and Jennifer Coolidge also fill out the cast.

Make no mistake, the movie offers a Hessian vision through and through, sprung from autobiography, a specific sense of place (time is more slippery) and a love of a particular brand of escapism, namely cheesy Sci-fi from the ’50s,’60s and ’70s. Being a traditional coming of age picture underneath, it also mixes a sweet, morally salubrious outcome with strangeness and gross-out humor. Home-schooled teen Benjamin Purvis (Michael Angarano, Sky High ) is a prolific writer of science fiction novellas with little experience of the big bad real world. At a writing camp, he meets two peers—hot-to-trot Tabatha (Halley Feiffer) and outré audio-visual impresario Lonnie (Héctor Jiménez)—along with his idol, writer Dr. Ronald Chevalier (Clement).

By and by, Tabatha and Lonnie option Ben’s opus “Yeast Lords: The Bronco Years” for a film and the pompous scribe—nailed by Clement sporting a Michael York accent and Spock-meets-Tom Jones wardrobe—steals and reworks the manuscript in order to revive his faltering career. Ben’s clueless and ever-protective mother (Coolidge), while trying to launch her own career designing modest nightgowns, finds her boy a “guardian angel” named Dusty (White) from church. She hopes the affectless dude with long curly locks and a nasal monotone will compensate for Ben’s lack of friends and the absence of a father figure in the exurban geodesic dome where they reside.

Three different screen adaptations of Ben’s book are spliced into the movie. The first is Ben’s own, with Rockwell portraying the heroic Bronco, a manly, hirsute hillbilly whose testicles are prized by his villainous nemesis. The second is Lonnie’s deliriously amateurish production, which stars Dusty and features Lonnie in the lead female role. And finally, we see excerpts from Chevalier’s version in which Bronco, now dubbed Brutus, is a transvestite in a platinum wig and mustache (also limned by Rockwell). Production designer Richard A. Wright deserves endless kudos for scrupulously rendering the details in both the real and fantasy segments—whether it is the décor of the Purvis domicile or, in the fantasy snippets, the mechanized Christmas reindeer and the clumsy Cyclops that Bronco/Brutus must battle in his quest for yeast on a glowing, faux-forbidding lunar landscape, production design is always stellar.

Jared and Jerussa’s script has its moments, particularly when satirizing Sci-fi prose is passages uttered by Chevalier. By making Ben a comparatively sane and normal protagonist and letting the bizarreness revolve around him, they adopt a traditional structure but then fill it with innovative moments. The adequate Angarano is supplemented by inspired actors. Clement’s precise performance and Rockwell’s rollicking turn stand out. Jimenez stole the show as Black’s sidekick in the Mexican grappling story Nacho Libre ; here he serves as weird ornamentation, with his unnervingly elastic mouth and emission of creepy sexual vibes, which are discernible in other parts of the film.

One is reluctant to attack the Hess’s for exhibiting homophobia or racism however, especially when viewing the picture as a coming of age tale concerning the fruits of a specific male adolescent or young adult mindset. Alongside the fascination with the abnormal and demented we find the movie’s fixation with body fluids and body parts. We’re talking gonads in a jar, Albino python diarrhea, a slurpy-sounding hand massage, streams of pink vomit and the role played by blow-darts tipped with human feces and rat poison. Though undoubtedly and intentionally jarring in spots, Gentlemen Broncos can be admired for its thorough, well-realized vision. As with all comedy, how funny you actually find it is a subjective matter, but the ingredients are in place for a cult favorite.

Make sure to check out our interview with Jared Hess here .