close
A big pat on the back 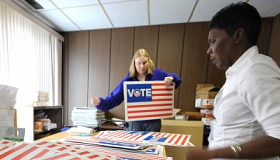 Is it fair to peddle a 76-minute public service announcement [PSA] with a few journalist and musician cameos slipped slip in, and call it a documentary? It’s a free country, sure; but beware of this lop-sided equation. Labor Day, the home-video styled retelling of the success of the Obama Campaign tails union volunteers stumping for the first ever African-American U.S. President. Yet it’s too conceited. This product lacks the “pow” to justify any major turnout or theatrical expansion beyond the two metropolises whose populations already watched most of this stuff on CSPAN and don’t have amnesia.

There’s nothing wrong with assigning a film crew to go out and chronicle the road to the White House through the union workers’ perspective. There’s a story there. However, shooting a self-fulfilling prophecy without showing any dissent or snags in the stitching degrades the effort. That’s the major drawback of Labor Day. The film shadows SEIU (Service Employees International Union), a player in the political cosmos repping doormen, nurses, home attendants and security guards amongst others. The purple-shirted boots-on-the-ground shout: “One more block for Barack” and are bolstered by seven-figure funding to get out the vote.

Two-million-plus members picked their pony and began to mobilize in the streets. Armies of volunteers granted leave from their jobs and families hawk Obama’s change mandate and sacrifice dearly to get him into the Commander-in-Chief’s office. In the mix are vast swaths of personalities. There’s the window washer with the goat-tee who’s excited because he’s never done anything political whatsoever or the Latina nurse from New York City who believes this is her calling. Even union higher-ups pound pavement with their brothers and sisters to recruit Obama voters in swing states like Florida, Pennsylvania, Indiana and various others.
The personalities showcased are sincere. And tack on a couple interviews with Time Magazine and Newsweek political staffers as well as injecting quick interviews with performers at a Minneapolis Take Back Labor Day concert (including Mos Def and Steve Earle) and there’s certainly enough support to lend labor gravitas.

Still, there is at no point a single volunteer throwing up his or her hands after a shoddy day. No heated arguments. Not a pill popped to quell the throbbing headache. No opinion seems to stray from the talking points. Everybody’s giddy to stump. Everyday. This makes the film feel padded and rinsed. Is the director solely trying to please his subjects?

There may be little to say with regard to the film’s mechanics. Sound’s good, and the DP shot a steady frame. But the subject matter becomes more and more elusive. So does Obama. Early on, he’s in the living room of the house and you feel close to the action; shortly after he’s a speck under the stadium lights while the camera captures from the nosebleed section.

When Barack Obama became President Obama, the nation and world were witness to the underdog who outthought and outfought his competitors through every scuffle—street or sanctioned. The troops in the trenches surely played their part. But if you watch Labor Day you’d think that one union alone was the reason for this victory. It’s clear they worked hard but the ensemble casts deserve credit too. There was an economic crisis and the bigger picture to this win, there were two previously dismal terms and a promise that there could be a new and brighter tomorrow with a shakeup at the top. The hard work is still ahead and while the union will continue to fight on they may want to open their doors to alternative perspectives come the next documentary pitch. This one doesn’t do much justice.