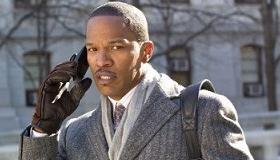 Littered with dull action sequences and needless operatics, this melodrama about Justice and the way hubris destroys it can only offer machismo to intrigue its audience. Gerard Butler plays Clyde Shelton, a man whose wife and daughter were killed in front of him in a hostile break-in. The attorney trying the murderer, Nick Rice (Jamie Foxx), is offered a bargain that lets the most violent offender off while putting the least violent attacker on death row. Rice’s decision indicates he’s more interested in his conviction rate than enacting justice, so Shelton sees to it that Mr. Rice learns a lesson, and it’s a long, chess-like, gadget-filled one at that. Foxx and Butler could attract decent numbers given their popularity but the only thing really worth seeing in the film is Butler in his one moment of partial nudity. Otherwise, it’s a bit of a slog.

Before Rice (Foxx) cut the deal with the man who murdered Shelton’s family, he asked Shelton: “Do you trust me?” That Shelton says “yes” gives us our only moment of insight into his character. After that episode, Shelton enters a ten-year downfall that includes a stint making spy-killing gadgets for the Government. Shelton’s a sphinx-like character in some regards, and we only see him from Rice’s detached and sometimes unfeeling perspective. Though he’s the attorney who destroyed Shelton’s belief in the safety of paternal institutions (Justice, Government, et al), Rice is a husband and father. While this aligns him with Shelton, it’s also helped him become a character so good at convincing others of his certitude he’s already forgotten what doubt looks like. In one scene he toys with his statue of Themis, the goddess of Justice, blindfolded and bearing a scale, but he himself proves that Justice is less a scale than a semi-involved system of pulleys and levers. It’s a system he believes works, with some sacrifice anyway.

It's encouraging to see men on screen; our cinema has a dearth of them. Foxx plays his character with a bravado that’s cocksure but not offensive. Butler, whose character is far trickier than Foxx’s, isn’t so clearly played; he bounces between cold tactician and wounded widow without reasonable motivation. Though the cat and mouse scenario is never reduced to a game, the rules value strategy and intellect, inferring here that the make of a man (as we see in the scene of Butler’s apprehension) is neither his clothing nor his language nor any other thing he uses to represents himself.

Ironic then that action in the film is such a drag: one imagines F. Gary Gray learned to direct from daytime soaps as his eye for pointless grandeur is matched only by his tendency towards poorly framed extreme close ups (how many foreheads can he cut off?). And while Law Abiding Citizen seems like one “Big Teachable Moment” about the nature of Justice and how ego destroys our forward progress, it also demonstrates a tension between our needs for progress and the system’s limitations on it. Still, the best thing about the film is Butler’s arrest—but not because it’s a good scene; it’s actually needlessly soapy. Shelton hears the police coming and undresses. His naked walk out of his safe house pits his beautifully articulated body against an inarticulate grey and green hillside that provides him no context or juxtaposition. He’s just a hot naked guy. Later we find out he’s smart, but before that we see him cold, detached, from a distance (not the right distance, but what can a girl do?) and portending for the moment to be the harbinger of justice as a human (not a systemic) principle, one each of us can enforce in our worlds and one that the arrogance of power so often corrupts.

Make sure to check out our interview with director F. Gary Gray here .