close
A tribute to talent

Michael Jackson's This Is It 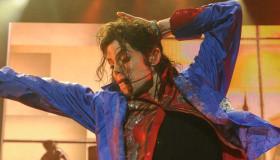 "The Church of Rock and Roll!" yelps tour director Kenny Ortega as the crew rises to its feet for Michael Jackson's rehearsal of "Billie Jean." No question: to fans, Jackson was the messiah. And this documentary is his resurrection. This reverential but genuine before-the-concert film corrects the tabloid impression that Jackson spent his final days (years?) as a pill-addled hasbeen. Here, we see the master close to the top of his game—a feat for practice footage of a 50 year old who hadn't toured since 1997. This is his ’68 Comeback Special and audiences will show their gratitude at seeing the legend restored with thrilling ticket sales during its two-week run.

First, we must confront the legitimate fear that This is It is exploitative. Our recent post-mortem culture has given us cause for concern. (Google "Anna Nicole Smith.") If Britney hadn't survived her head-shaving meltdown, I'd boycott any producer who tried to gild her final project into a special event. But as the film's director, Ortega is as slaveringly solicitous to his subject as he is in the rehearsal footage where he appears. (Between helming the tour and this film, he also directed Jackson's Staples Center memorial.) 100 hours of casual footage were shot and the two hours we're given haven't a hint that Jackson will die of a painkiller overdose eight days before the tour crew decamped to England. This is certainly due to a legal clause between Jackson's estate, Sony and AEG Live that "footage that paints Jackson in a bad light will not be permitted." It might—just might—also be that Jackson was fine. (The flick doesn't do any favors for the doctor still hounded with a manslaughter investigation.)

For a man dismissed as a recluse, we here see his smooth teamwork as he receives compliments with '"God bless you" and offers criticisms capped by "With love. L-O-V-E." For a rumored heavy pill user, he's alert enough to vamp even a simple arm wave into eight small, crisp flourishes of shoulder, elbow and wrist. For someone on his last legs, he's less winded than his backup dancers who have 30 lbs of extra muscle and 30 fewer years on him—plus he's singing. And for a quick cash-in borne of financial desperation, Jackson's attention is on every single drumbeat of the show. (I wanted to kick the chair of a nearby guy who snickered when musical director described the King of Pop as "hands-on.") Based on his preparations for the show, Jackson sincerely believes he's creating a gift for his fans—even hooking up Swarovski with scientists in the Netherlands to make sure his sparkles are the world's sparkliest. He climbs out of giant spiders and halts prop bulldozers with a single, "Hooooo!" "We want to show them talent they've never seen before," he emotes to the crew. And for 44 years, that's just what he tried to do.

We're used to the idea that athletic live concerts are grudgingly allowed some lip-syncing. We even take it as the rule. But we learn that Jackson was committed to singing, and did so even through these rehearsals, apologizing for protecting his voice as he belts out an album-perfect chorus. Stretched out through these ten intensive practices (my rough estimate based on his outfits), that's dedication—especially with 50 exhausting concerts ahead. Those who never saw him live and only knew him through slick singles, videos and appearances get a tiny thrill from hearing the rawness that comes from his commitment to craft, those moments he skips a lyric because he's shifted attention to his feet.

I choose to take it as a sign of old-fashioned celebrity politesse that Ortega allows Jackson to be remembered for his talents. He's human here—at least, far more than we're used to seeing him—his worst fault is his affection for Christian Audigier and t-shirts with Popeye spackled in bling. To snipe that a pop star doesn't merit the reverential rank of Mother Teresa is petty (and proof one hasn't read Christopher Hitchens' savage takedown The Missionary Position ). But the film doesn't ask experts (read: celebrities) to wax on about his worth. The only people that talk about him are the only people who should—the crew who knew him when he was at his most-Michael: performing for the public, the only constant in his life. Every hand on deck gets a turn, from the backup dancers who wept when they were cast, to Orianthi Panagaris (the 24 year old blonde lead guitarist that I want to be when I grow up), to the in-ear monitor audio technician given his due in the credits. Jackson is the star, but Ortega is clear that this isn't a one-man show. The tour Jackson called his "final curtain call" might be his last bow, but his inspiration lives on.