close
Lives up to its title

More Than a Game 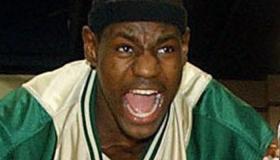 In his recent speech to America’s schoolchildren, President Obama chided youngsters who’ve come to believe “your ticket to success is through rapping or basketball or being a reality TV star.” The President, of course, meant that America’s youth should be excelling in math and science and other career pursuits that advance the cause of America, not low-probability shortcuts to fame that further cement our current cultural predilection for egotism and narcissism. Basketball, however, differs in that it teaches kids the value of teamwork and, especially in the inner cities, gives their young lives structure and meaning. Exhibit A of this theory is More Than a Game, Kristopher Belman’s chronology of five Akron, Ohio boys who met, flourished, foundered and became a family through basketball. But fear not Lionsgate: the doc’s financial outlook brightens considerably because one of the young players is current NBA superstar LeBron James. Further on the bright side, maybe Belman’s film will instill in youngsters an interest in documentaries, of which this is a generally fine example.

Belman has been following his youthful subjects since 2002. And in a stroke of luck that documentary filmmakers dream about, one of them grew up to make the short list of world’s most famous athletes. Still, he resists the temptation to make his film The LeBron James Story, or add artificial weight to James’ contribution to the tale. More Than a Game is an ensemble piece about pre-teens who met at the Maple Street Salvation Army in Akron in the early ’90s. Dru Joyce III, Willie McGee, Sian Cotton and LeBron James all came from compromised backgrounds before forming a traveling amateur team for the Amateur Athletic Union (AAU) coached by Dru’s father, Dru Joyce II. While James was clearly a different breed, even at that age, the others were also talented. Most memorable is hotheaded Joyce III, who could drain three-pointers but was 4-ft nothing and so short that he’d hang from a pull-up bar in his bedroom (hoping it would make him taller). Belman, who directed, wrote, co-produced and shot the film, has well-absorbed the language of documentaries and employs it well in chronicling the team’s first major test, a nail biter in the AAU championship in Florida in 1999. The following year, the Fab Four, as they originally called themselves, enrolled in St. Vincent-St. Mary (SVSM), a predominantly white high school. There they formed a bond that the movie claims exists to this day, although a present-day group shot would have sold this idea better.

Given his subject’s backgrounds, Belman doesn’t push the socio-economic and racial angles as much as he probably could have, so at times the film feels pat and lacks the Big Picture import of Hoop Dreams, Steve James’ masterful 1994 documentary. Regardless, More Than a Game will be inevitably be compared to James’ doc, which is unfair since not every basketball documentary can be Hoop Dreams. Belman, instead, provides a steady and occasionally inspirational riff on Heywood Broun’s wonderful adage, “sports do not build character, they reveal it.” This is very apparent after the team became “complacent, arrogant, selfish” upon winning the 2000-2001 Division III championship and moving up to Division II play. In their first year in Division II, fans were scalping tickets to see these teen phenoms and it’s remarkable that James’ fame (he became the first high school athlete to grace the cover of Sports Illustrated in over thirty years) and the burden of growing expectations didn’t swallow him whole. Instead, the entire team became cocky, partying too hard and ignoring their coach. They paid the price in their devastating duel with Roger Bacon in the Division II state championship game. The next year, they rededicated themselves to the concepts of humility and teamwork, with Belman using their subsequent 2003 national championship game as a framing device.

While as boys they were terrific athletes, as men they’re only decent interview subjects. James admits that he’d “sit on the sidelines crying” after being declared ineligible with five games left in his senior season for accepting gifts. Otherwise his interview bites feel a little canned. He does, however, come off as a wonderful friend and when you consider the unusual life he’s lead, his ability to stay grounded is more amazing than all the half-court baskets caught by the cameras of 60 Minutes. James may be the engine of interest that drives the story, but its heart and hero is Dru Joyce II. The son of a janitor, Joyce II dropped out of corporate America to teach basketball. After shepherding his son’s AAU team he became assistant coach of SVSM, creating friction between Joyces II and III. Later, Joyce II would replace Keith Dambrot as SVSM’s head coach and have to navigate the fortunes and emotions of kids with little life experience being thrust into the national spotlight (watching his team implode with arrogance during their inaugural year in Division II made him “go out in my backyard and just scream”). Through him, we realize the greater triumph of the boys of Saint Vincent-Saint Mary. Indeed, only one of these young men would grow up to be a professional basketball player, but all five would have to grow up. And although, like any group, some have become more successful than others, it’s not hard to imagine what would’ve become of these boys-to-men without the tutelage of Coach Joyce and their faith in each other’s friendship.