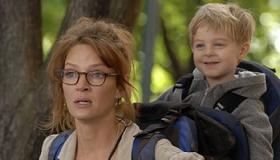 Some movies, like Roman Holiday, invite you to escape into their worlds, buy a plane ticket to Europe, cut your hair into bangs; Motherhood, the grueling comedy by Katherine Dieckmann, is a warning to stay away. It scares straight any wishful daydreams about parenting, living in Manhattan and even looking like Uma Thurman. If babysitters can be found, the draw of cathartic frustration might build a decent matinee attendance of secretly miserable moms (apparently this is the majority of moms, if the blogosphere is to be believed). If the audience expands beyond that, ob-gyns adjacent to theaters should see a spike in inquiries about tubal ligation.

Thurman plays a harried mother of two who was once a promising grad student in writing with an interest in experimental erotic narratives, and now barely has time to hammer out a few pithy sentences on her mommy blog, The Bjorn Identity. The blog is named, presumably, after the hipster baby backpacks, however Thurman and increasingly distant husband Anthony Edwards are too broke to afford the name brand. It's daughter Clara’s (Daisy Tahan) sixth birthday, and Thurman's under even more insane pressure than usual to buy and set up goodie bags, cake, decorations and snacks on top of moving the car for street sweeping, cleaning the house, walking the dog, taking her younger son to the park, checking in on their elderly neighbor and schlepping up and down the six flights of their ratty Greenwich village walk up. What else could go wrong? A film crew could commandeer the block, best friend Minnie Driver could get justly outraged at her most recent blog post, neighbor child Isabelle Fuhrman (the killer Orphan in a too-short cameo) could brag about her far superior party and, oh yeah, she could be surrounded by other New Yorkers who haven't acted this hostile in a movie since Crocodile Dundee.

Dieckmann is right to recognize that normal mothers (read: neither saints nor train wrecks) are rarely the centerpieces of Hollywood flicks. There's a need for moms to pick up the Zinfandel and vent about the truth: that parenthood feels a lot like subjugation and despite every dish soap commercial claiming moms can have it all, more often than not, they can't. Thurman drags us to every dark place: her character is aching to once again feel smart, sexy and worthwhile. And the script gets in a few good digs at the playground snobbery that pits moms against moms like panicked, blustering birds at a cockfight. But the jokes don't register enough as jokes to enjoy watching this disastrous day play out. In the last minutes of the film, Dieckmann softens and says that the sublimely inarticulate love a parent feels for a child can in one shared smile balance out a day's worth of hell. But largely, we see the sulphur. Thurman suffers in this role, her hair soaked with sweat, glasses careening off her nose. When young mail courier Arjun Gupta ventures a flirtation with her at her most frazzled, she's so vanished into this miserable mom that we, too, are caught off guard—what then, we wonder, can motherhood wreak on us mere mortals? At least for the cost of a DVD, sex-ed classes have a new way to promote abstinence.