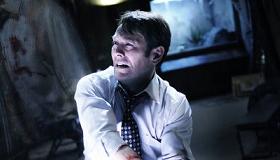 A by-the-numbers edition of formula splatter and elaborate death traps inspired by the franchise serial killer Jigsaw (Tobin Bell) allows Saw VI to meet the expectations of its young male fan base and become the latest successful entry in the five-year franchise from Lionsgate and Twisted Pictures. Its sly, surprisingly political spin (the victims are loan officers involved in the mortgage crisis and a greedy exec from a health insurance company) makes Saw VI one of the more original entries in the Saw series and helps it appeal to non-fans simply interested in watching a scary movie. The one certainty is the future of the product-consistent Saw franchise, as work on Saw VII in 3D is already underway in order to make a release scheduled for October 2010.

The best splatter occurs not at the climax of Saw VI but at its very beginning. A pretty female loan officer competes with her portly male assistant to see who is willing to slice off a pound of their own flesh in order to escape their elaborate death traps. They are both willing participants of the mortgage crisis and their greed may cost them their lives.

Like tuning into an episode of the Lionsgate TV series Mad Men, watching Saw VI requires knowledge of Saw history since the latest edition picks up from the last film.

The FBI is trying to find who’s behind the latest Jigsaw murders as the original Jigsaw (Tobin Bell) is presumed dead (in Saw III ). Standing in the middle of the current chaos are Saw veterans Detective Hoffman (Costas Mandylor) and Jigsaw's widow Jill (Betsy Russell). Hoffman is desperate to protect his identity while his victim, the obnoxious head of a health insurance company (Peter Outerbridge), fights to survive various traps in an abandoned zoo.

Saw VI claims matter-of-fact production values with the exception of the elaborate traps. Its unknown cast of victims take a back seat to the splatter.

Modest production values aside, fans will rank Saw VI as one of the better entries in the series, helping word of mouth among its young male following. More importantly, Saw VI will match the $56 million box office of its predecessor making it one of year's top horror films behind The Final Destination, Zombieland and the latest re-boot of Friday the 13th.

Audiences in search of horror, especially those who have already watched the ghost story Paranormal Activity, will join the splatter boys and catch Saw VI. In addition to another successful domestic release, the profile for the Saw franchise will also increase worldwide as it opens day-and-date in various international markets. Better yet, fans will support the DVD and home video release just in time for Saw VII 3D to hit theaters October 2010.

For Lionsgate, it remains a good time to be in the Saw business.