close
Rallying the geek fanbase for a second round 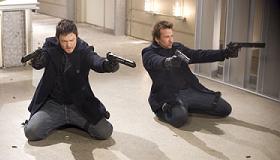 The wildly inconsistent but unfailingly audacious The Boondock Saints II: All Saints Day begins with a dead man’s homily about the eternal war between talkers and doers. It’s a self-conscious but entirely appropriate overture for an overdue second feature from a moviemaker the pashas of Hollywood left for dead almost a decade ago, only to see him find a sizable geek audience and use them to leverage another film.

Say what you will about Boondock Saints auteur Troy Duffy, he refuses to become anybody’s object lesson. He’s a doer ultimately, in a town that can talk a man to death. And if the studio allows his constituency an opportunity to see his inexpensively made latest work (the planned release is a spotty one so far), Boondock II might even turn a small profit at the box office before joining its predecessor as a DVD cult item.

For a news cycle or two back in 1997, Duffy was Hollywood’s next big thing. Miramax’s then-boss Harvey Weinstein had decided to let Duffy direct the vigilante-themed Boondock, Duffy’s first-ever screenplay, about a pair of Irish brothers (Sean Patrick Flanery and Norman Reedus) who ritualistically execute cliché mafia types via prayer, pistols and pennies on the eyes. The press ate it up when Weinstein promised to give Duffy the bar he worked in as part of the deal. Then the deal went south, Weinstein allegedly became a venomous enemy and Troy Duffy’s world crumbled to the ground.

We know all the gory details because Duffy’s own ex-producing partners made him an industry-wide laughing stock with their savagely brilliant documentary Overnight, a fly-on-the-wall chronicle of the making and unmaking of Boondock Saints that is almost surely the unacknowledged bible for HBO’s Entourage. Overnight displayed Duffy’s hubris, arrogance, paranoia and just plain nastiness with an immediacy reality shows never come close to capturing, even when their protagonists are going through the early stages of messy divorce. You think the Gosselin clan is a disaster? Try sitting through Overnight ’s bitter, closely observed testament to how unexpected showbiz success can set old friends and family members biting at each other’s throats like rabid dogs.

But Duffy survived it all and has at last lived to make his follow-up film. The Boondock Saints II: All Saints Day reunites the McManus brothers with their equally homicidal and righteous dad (Billy Connolly), sending them back to Boston from their exile in Ireland to take on a copycat killer and knock off another generation of mob chieftains like so many overacting duckpins.

Breakfast Club -ber Judd Nelson turns up as a mob boss channeling Al Pacino but missing by about three stations, and the usually reliable Clifton Collins Jr. replaces Della Rocco’s sidekick as sentimental Latino gangster wannabe Romeo. Collins has been scripted and directed as a kind of Chihuahua bobblehead; in a film full of overly broad performances, Collins’s is both the broadest, the most ethnically insensitive and the least enjoyable, and that is saying something.

Whether or not you think Boondock II was worth the ten-year wait will probably depend on how you felt about the first movie, of course. But at least as important is how much stomach you have for Duffy’s juvenile, homophobic, blue collar, Tarantino pastiche; his excessive verbosity; his Frederick’s of Hollywood sexism; and his Man Show level “boys will be boys” philosophizing about why men should be allowed to be assholes, drunkards, lead-footed speeders and on and on.

Personally, I loved it.

Not because it’s good the way a Tarantino or a Scorsese film can be (it isn’t). Though portentously staged and scored, Boondock II isn’t remotely well crafted; despite a handful of self-consciously big set pieces, Duffy too often stages his action as music video flashcuts and inserts of emptied guns being dropped, the better to mask his fundamental disinterest in basic visual geography. The little pop culture arias in the dialogue are sub-Tarantino stuff too. Duffy’s just not a deep enough shallow thinker to pull this stuff off the way QT does.

And yet, somehow, Boondock II grabs you with its very sloppiness and the sheer giddy joy it takes in making idiosyncratic choices—choices the average crime thriller wouldn’t even know where there. There’s a scene in heaven. There’s a balletic ’70s cop show dramatization of a plan as its being hatched (easily the best-directed and most rhythmic scene in the movie). A skein of Three Stooges slapstick runs through the picture (the Saints were never the most accomplished assassins, but they seem to be emulating Shemp Howard here). And all those goombah mobsters being played as if they were singing death scenes in an opera just add to the cartoon fun.

In a climactic scene, the Saints mop up everything that remains of the crime family they took down in Boondock I. Julie Benz’s Special Agent Bloom appears in the middle of the mayhem, drawing out a six-shooter and wearing a sexy sheriff ensemble as she explains to her police colleagues what her investigatory skills tell her went down. Reconstructing crime scenes by putting the detective into the action is a technique borrowed from Boondock I, and it’s a bit overused in the sequel, but it yields Boondock II ’s most iconic images here.

As the McManus boys dish out Hollywood justice the way it’s been practiced for over a century, Benz smiles blissfully, a knowing stand-in for all the John Waynes, Gary Coopers and Charles Bronsons who have shaped America’s ideas about both art and justice down the days. She is sex, she is death, she is retribution without consequence and she’s as American as apple pie. Troy Duffy is too, and as blemished and inconsistent as Boondock II is, you will not see another movie quite like it this year. In such a tepid era of impersonal cinema, you just have to take what you can get.