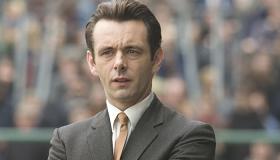 Arthouse moviegoers, even the most ardent Anglophiles, will be unfamiliar with the names Brian Clough (Michael Sheen) and Don Revie (Colm Meaney), the key characters at the heart of director Tom Hooper's period drama about rival English soccer coaches, The Damned United. With the exception of The Wrestler, these same specialty film fans usually turn up their noses at sports dramas. Still, beyond the period soccer stadiums, ’70s era uniforms and little-known history regarding England's football teams, The Damned United has fascinating storytelling, beautiful cinematography and the most complex and riveting lead characters imaginable. Clever marketing that focuses on the reunion of screenwriter Peter Morgan and actor Michael Sheen, who have collaborated on both The Queen and Frost/Nixon, will help Sony Pictures Classics persuade arthouse patrons that director Tom Hooper's sophomore feature is more modern British history drama than a soccer movie. Positive reviews and good word of mouth will also benefit but Damned United looks likely to suffer the poor commercial fate of another Sony Classics release, the immigrant baseball drama Sugar. Damned United will rank high on many year-end critics lists but the majority of its audience will come later via home video.

Via numerous flashbacks, Morgan reveals the personal history and fractured psyche that led Brian Clough (Sheen), a former striker and successful manager of the Derby County team, to leave trusted assistant Peter Taylor (Timothy Spall) and replace his coaching nemesis Don Revie (Meaney) as the head of the country's top club, Leeds United. Outspoken, arrogant and determined to change the "dirty" play of his star players, Clough lasts only 44 days at the helm of Leeds. As captured by Hooper and Morgan, it's a brief but dramatic ride.

The Damned United, an official selection at the recent Toronto International Film Festival, is Hooper's sophomore feature film and his latest collaboration with producer Andy Harries and writer Peter Morgan following their work on the acclaimed HBO drama Longford. Hooper remains best known for his small screen work, the miniseries John Adams and the British TV drama Prime Suspect 6: The Last Witness, but Damned United shows a storyteller made for the movie screen.

Still, the soccer field is just the setting for Hooper's tragic drama; much in the same way Castle Elsinore is a setting for Hamlet. Morgan adapts David Peace's novel and cleverly tweaks it into a tale of abused friendship and misguided dreams. Thankfully, Clough makes a fantastic tragic hero.

Timothy Spall, best known for his roles in the Mike Leigh films Secrets and Lies and Life Is Sweet, is a welcome voice of reason as Clough's loyal assistant and friend Peter Taylor. Spall brings Taylor to full life, so much so you ache when Clough mistreats his longtime friend.

With his broad forehead and slicked back hair, Sheen is compelling, over-the-top arrogant and utterly fascinating as Clough. Sprinkled within the charismatic wordplay, Sheen captures Clough as a man whose ego, talent and sense of ambition brews into the perfect downfall. He outperforms himself here, even outdoing his role as David Frost in the recent Frost/Nixon, which is a feat in itself.

Unfortunately, more people will see Sheen this fall in a supporting role in the next Twilight installment. His work in Damned United will become a pleasure for the select arthouse audiences willing to take a chance on a soccer movie. Hooper will also gain a much-deserved boost to his directing profile. He's already set to direct a remake of the John Steinbeck classic East of Eden for Universal Pictures and Brit period drama The King's Speech, featuring Colin Firth and Geoffrey Rush, so big screen commercial success is just a matter of time.