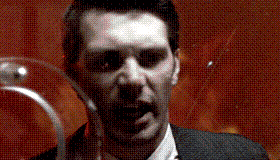 Not to be confused with Tarsem's sweeping 2006 fairy tale epic of the same name, independent crime drama The Fall features a mostly-talented cast doing good work and surprisingly striking visuals given the film's $500,000 budget. Yet, the film fails to weave any particularly intriguing twists and turns from dark secrets past and present, and it ultimately rushes towards an abrupt conclusion. It's a good first film for debuting writer/director John Krueger; the kind that shows promise but ultimately leads to better things. It seems likely that any audiences enjoying The Fall will be more likely to do so on home video or cable television than to pay to see the film in theaters.

Brothers Tony and Frank Jakubiak (Benny Ciaramello and Scott Kinworthy, respectively) are leading wildly different lives. Tony is on the verge of moving in with his disfigured, former-junkie girlfriend, Mery Beth (Erica Hoag), while he looks for construction work that doesn't require a high school diploma. Frank, meanwhile, is about to become a judge, and he and his wife Brooke (Erica Shaffer) are thinking about babies and a run for governor. One night, two old ladies and a priest leaving church bingo are assaulted for their winnings, and a priest is murdered. Through a mysterious series of events, Tony ends up on the scene and arrested for the crime, and it's up to Frank to try and pry the truth about where he really was and why before his brother defiantly allows himself to be convicted and jailed.

As the two brothers, Ciaramello and Kinworthy form a believable pair: Kinworthy has good screen presence and solid delivery, playing a likable protagonist, but Ciaramello in particular takes a character that might be plainly annoying—angry, standoffish and determined to hide something from both the other characters and the audience—and manages to stay not just engaging but even fitfully appealing.

Unfortunately, the movie's big secret amounts to boring soap-opera dramatics that don't seem likely to shock anyone. Early in the film, Frank gives a speech at a fancy dinner party about his brother, and the audience listening is audibly taken aback to hear that Tony was a heroin user. Not to diminish hard drug problems, but in this day and age, it's hard to buy that even the distinguished upper class would gasp out loud at something so straightforward. The betrayal at the heart of The Fall is more shocking than heroin, and in real life it would undoubtedly rattle everyone involved, but the silver screen demands more compelling plot than this movie has to offer. The film's conclusion feels like it's missing a scene where the characters take more action, cutting to credits while the audience is still waiting for the other shoe to drop.

Krueger directs with admirable, TNT-level gloss for the money spent, and The Fall will at least appear striking on the big screen; even if it lacks the gloss and production value of a major Hollywood movie, it looks far better than some independent films since the dawn of digital. The Fall may be mediocre, but with more money and a better script, Krueger should find himself behind the wheel of some better thrillers in the future.