close
An engaging story about an odd couple 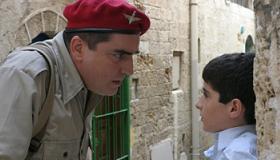 After nearly two years on the festival circuit Lynn Roth’s alternately funny, compelling and touching look at the odd friendship between an English Sergeant and a determined Israeli boy during the British occupation of Palestine is finally getting a well-deserved, if limited, theatrical release. With ace performances by Alfred Molina and a remarkable young Ido Port, this little-movie-that-could is well worth checking out wherever you may find it. Modest box office returns and a decent life on DVD can be expected for this tiny gem that should draw good word of mouth if it can hang in there.

Based on Amos Oz’s novel Panther In The Basement, the film is set during the British takeover of Palestine in 1947, just months before Israel was to become a state. The story centers around precocious Proffy Liebowitz (Port) who is set on getting the British occupying force out of his homeland. One day when he breaks curfew he is caught by Sergeant Dunlop (Molina) who, instead of giving him hell, takes him home and strikes up the beginnings of a unique friendship. Several clandestine meetings follow, wherein the odd couple talk about many things. Unfortunately Proffy’s friends catch him doing this and rat him out which leads to a public trial in which he is accused of being a little ‘traitor.’ It’s during this trying time that he learns lessons he will carry for a lifetime.

The story is simple and the execution by writer/director Roth keeps it that way, holding the focus of the film on the moving relationship between two foes that grow to like and understand each other. The inherent message is obvious but considering the still frustrating lack of progress in this region of the world a film symbolizing tolerance, understanding and communication cannot be faulted for trying to make a difference.

Where The Little Traitor really comes alive is in the terrific performance of its young lead, Ido Port, who is a true natural in front of the camera. The film lives or dies on his shoulders and he delivers a likeable and engaging portrait of a kid just on the edge of finding out what it’s like to be an adult. Equally fine is the always reliable Molina, a real casting coup for Roth, who is understated and believable as the worldly and kind British Sergeant. Other cast members are fine including local actors Rami Hoebreger and Gilya Stern as Proffy’s parents and veteran Theodore Bikel as the interrogator in the case.

Shooting on locations in Jerusalem, the film feels real and authentic with Roth getting the most out of the local atmosphere but it’s her fine screenplay and keen eye for casting that makes The Little Traitor stand out from the pack.