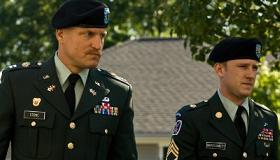 Israeli-born Oren Moverman's debut feature stars Ben Foster and Woody Harrelson as army representatives who are assigned to inform families their relatives have died in combat. It’s a somber but gripping tale that won the best script Silver Bear recently at the Berlin Film Festival. With timeless resonances, this story of redemption, hope and resilience should have solid prospects for serious-minded filmgoers as well as Harrelson devotees.

Foster and Harrelson form an unlikely pairing. Foster’s character Will is a decorated Iraq war hero who is sent back to the States with still a few months left of service. His commander assigns him to the task force in charge of informing the next of kin of soldiers’ deaths within 24 hours of the event. Will’s superior officer Tony (Woody Harrelson), has had a checkered past as a recovering alcoholic and, as a result, is a stickler for doings things by the book.

Their joint task obviously takes its emotional toll. Will becomes particularly affected by Olivia (Samantha Morton), whom he has to inform about her husband’s death. The two embark on an awkward relationship. The way this development impacts his work and his friendship with the Harrelson character forms the basis of the drama.

Messenger is succinctly paced by Moverman, while the script, which he co-wrote with Alessandro Camon, balances the serious issues with just enough natural humor to lighten the load.

The quality of the playing lifts the film—from the subtlety of Foster’s intense portrayal to Harrelson’s broken bravado and Morton’s heart-wrenching sorrow.

Although Hollywood has dealt with the war from various perspectives, Moverman’s film offers a new angle that brings the horrors home about the decision to go to war. These personal tragedies away from the front line have the potential to be far more affecting than the thick of the conflict itself.