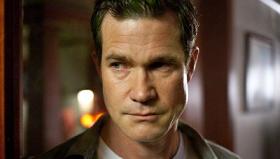 Joseph Ruben's original 1987 thriller The Stepfather starred Terry O'Quinn—who would go on to play spooky John Locke on Lost —as the titular serial killer with a habit of marrying women with children and then murdering his new family. His terrifying performance transcended weaknesses in the story, transforming what could have been just another schlocky horror movie into a cult classic. Now remade for the 21st century, the new film traps Dylan Walsh in an even more ridiculous script, and while he is a fine actor he lacks O'Quinn's intensity. There is no masking the mediocrity of this Stepfather. Horror fans may turn out opening weekend but box office returns promise to be as anemic as J.S. Cardone's screenplay.

When he meets divorcee Susan Harding (Sela Ward) and her two children, Skyler (Beth Harding) and Sean (Braiden Lemasters), in a Portland supermarket, David Harris (Walsh) quickly ingratiates himself to the family. By the time Susan's teenage son, Michael ( Gossip Girl 's Penn Badgley), arrives home from military school for the summer David and Susan are engaged and David is living in the house. On the face of it Michael should like David, who actively campaigns to persuade Susan to give Michael permanent leave from boarding school. Despite David's friendly overtures and his mother and girlfriend Kelly's (Amber Heard) advocacy, Michael is suspicious.

Michael, although he is required to do a couple of things that are jaw-droppingly dumb, is the strongest character in the movie, by far. He is caught in a bind. Not only does he not want to get sent away again, but he struggles with the possibility that his suspicions could be horribly off-base and revealing them would mess things up for his mom. In that context, Michael’s pause to take action makes perfect sense. In contrast, Susan's credulity, even after she finds out that David has abused her younger son, makes less sense, and Kelly's whining that Michael would rather go back to military school than spend his senior year with her after he shares his anxieties about David are downright ridiculous.

But then, there’s so much of The Stepfather that is just as ludicrous. David trying to keep Michael at home rather than sending him back to military school is idiotic. It may be his pattern to slaughter entire families, but would he really want to keep a teenager around who is as big and strong as he is? Michael is not the only character who senses something off about David, yet no one acts on their suspicions, even when they have evidence that should inspire them to go to the police.

About the best that can be said about The Stepfather is that it’s not dull—but neither is it scary or suspenseful. This is the horror movie equivalent of hospital food, depressingly bland. It is one more movie that argues against remakes. If you cannot make something at least as good as the original, why bother?