close
Bound to introduce a French filmmaker to specialty audiences 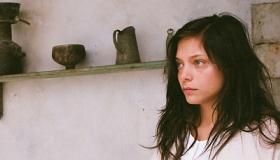 The heartfelt themes of faith, Jewish-Muslim tolerance and sexual awakening make Tunisian-French filmmaker Karin Albou's coming of age drama, The Wedding Song, a standout specialty release. Albou's sophomore feature should be guaranteed enthusiastic reviews and strong word of mouth. An unknown cast, with the exception of French actor Simon Abkarian ( Casino Royale ), and a director still gaining a profile in the U.S. will keep box office modest during the most competitive season for specialty films. Instead, The Wedding Song will win admirers on home video, help introduce Albou to new audiences and bring added prestige to Strand's release slate.

It's November 1942 and the German Army has entered the Tunsian capital Tunis. They quickly implement policies used by France's Vichy government and fine members of the Jewish community. The Germans also outlaw many of the Jews from working, which means Myriam's mother, Tita (Albou), can no longer take care of her. As anti-Jewish propaganda increases in Tunis, Myriam and Nour grow apart. War has made the future of their once-strong friendship unclear.

Albou even steps in front of the camera to give a strong performance as Myriam's struggling mother. Her scenes with Brocheré are some of the best in the film.

Olympe Borval is sympathetic as the young Muslim girl who loves her fiancé and finds it all too easy to accept his collaboration with the German army. Lizzie Brocheré gives the most dynamic performance in the film. She's an innocent forced to make drastic changes involving her best friend, a new husband and her fears regarding the sexual expectations placed on a new bride. It's worth noting that Albou handles the sexual elements of her young leads with impressive delicacy—especially the scenes involving the "oriental" treatment of a bride on her wedding night.

Marketing that focuses on the feminist and female friendship themes and draws comparisons to acclaimed dramas like My Summer of Love and Aimee and Jaguar will build outreach to female audiences. At the very least, Wedding Song will gain larger audiences on home video and build U.S. recognition for the talented Albou.